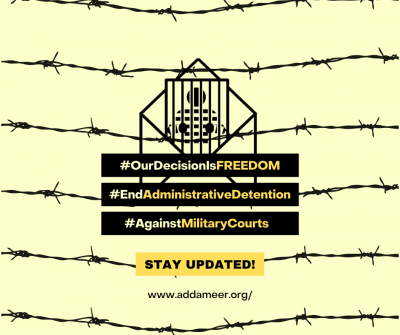 Since the initiation of their collective boycott on 1 January 2022 under the campaign ‘Our Decision is Freedom…No to Administrative Detention,’ all 490 Palestinian administrative detainees have completed three months (90 days) of their mass, collective, and comprehensive boycott against Israeli military courts. The boycott comes amid Israeli occupation authorities’ broad escalation of administrative detention targeting Palestinian human rights defenders, students, politicians, and former prisoners. 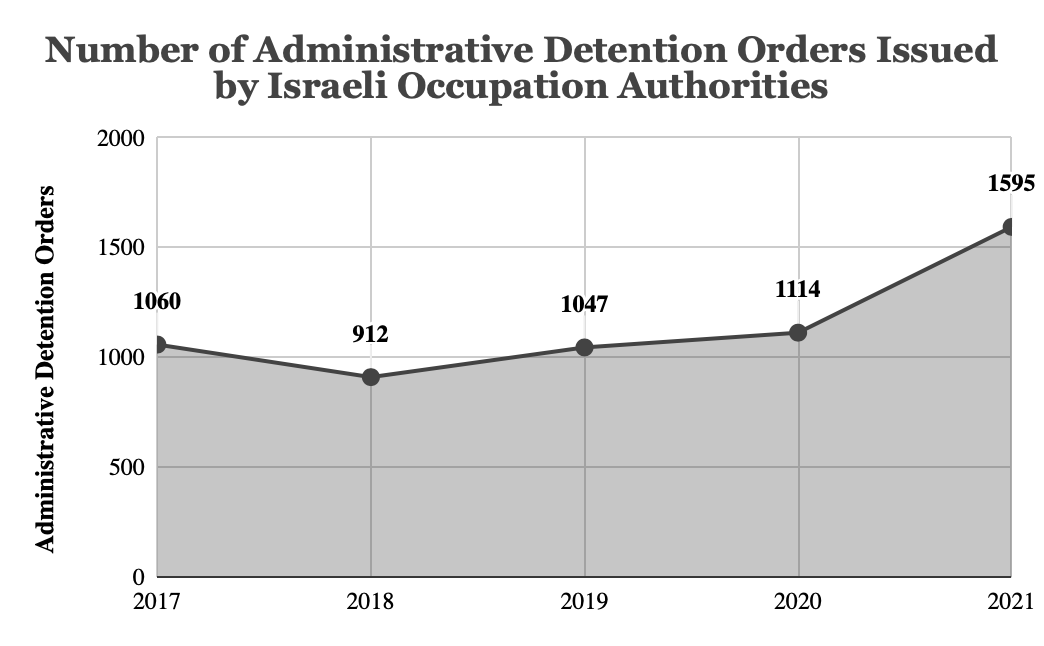 Throughout, the Israeli military judicial system plays an integral role in facilitating the expansion of administrative detention, and more broadly, in sustaining and feeding the establishment of a comprehensive Israeli apartheid apparatus over the occupied territories. For three months since the initiation of their boycott, all 490 Palestinian administrative detainees have boycotted Israeli military courts at all levels, including courts of first instance, appellate courts, and the Israeli civil ‘High Court,’ refusing to participate in court procedures and hearings and asking their legal counsel to do the same. Since then, Palestinian administrative detainees have had their administrative detention orders confirmed and renewed in absentia, without any respect for the detainees' rights.

More recently, on 7 March 2022, Israeli Occupation Forces (IOF) violently arrested Palestinian-French Jerusalemite, human rights defender, and Addameer lawyer Salah Hammouri, extending his detention before issuing a three-month administrative detention order against him. Salah has been the subject of Israeli persecution since he was 15 years old, and has faced continuous judicial and administrative harassment by Israeli occupation authorities, including imprisonment and arbitrary arrests, travel bans, separation from his family, surveillance, and the illegal revocation of his permanent Jerusalem residency and forced deportation on 18 October 2021. Salah joins the boycott, refusing to participate in the military court procedings related to his administrative detention and requesting his legal counsel do the same.

Further, on 25 March 2022, IOF arrested the mayoral candidate for Al-Bireh, Islam al-Taweel, ahead of the second round of the Palestinian municipality elections on 26 March 2022. Two days later, on 27 March 2022, the Israeli military commander issued a four-month administrative detention order against Islam al-Taweel, reflecting the Israeli occupation and apartheid regime’s longstanding policy of arbitrarily arresting and detaining Palestinian political leaders.

Over the years, United Nations experts and Special Rapporteurs have issued several statements, most recently on 21 October 2021, strongly condemning Israeli practices of administrative detention in violation of international law, calling on Israeli occupation authorities to "release or charge" detainees and end its "unlawful practice of administrative detention," emphasizing their arbitrary nature "which is strictly prohibited under international law, including international humanitarian law." Notably, the Human Rights Committee’s concluding observations on the fifth periodic report to the Committee on Civil and Political Rights stated that Israel “should immediately put an end to the widespread practice of arbitrary arrests and detention, including administrative detention, of Palestinians, in particular, children.” Further, the concluding observations highlighted the arbitrary nature of Amal Nakhleh and Salah Hammouri’s arrest within the broader context of maintaining control over the Palestinian people.

13-11-2022
Addameer Submits Testimony during the Commission of Inquiry on the oPt and Israel's Public Hearings
29-11-2022
On the International Day of Solidarity with the Palestinian People 96 Organizations Stand with Palestinian Political Prisoners
09-11-2022
Palestinian Organisations to COP27: Climate Justice Demands Free Civic Climate Space
Available in English