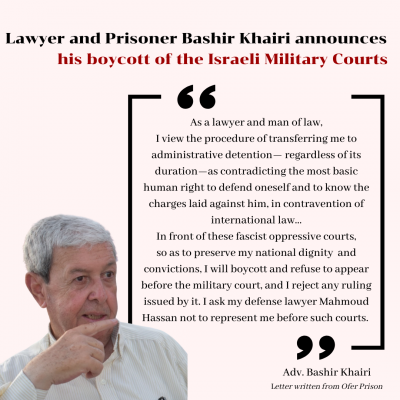 In an alarming escalation of the Israeli Occupation's systematic targeting of Palestinian human rights defenders (HRDs) and civil society organizations (CSOs), Israeli occupation authorities initiated a renewed persecution campaign against 79-year-old Bashir Khairi. Mr. Khairi is a Palestinian lawyer and HRD who served as legal advisor to several Palestinian CSOs. Additionally, he is a former political prisoner arrested in 1968 and incarcerated for 15 years in Israeli occupation prisons.

On 29 October 2021, Israeli Occupation Forces (IOF) stormed Mr. Khairi's home in Ramallah, arresting him and transferring him directly to Ofer military base. On 1 November 2021, the Israeli military prosecutor requested multiple extensions to the detention of Mr. Khairi to 3 November, then 8 November, then again to 15 November 2021, all of which were approved by the Israeli military court. On 15 November 2021, the military prosecutor submitted a list of charges against Mr. Khairi relating to his alleged association in an organization deemed "unlawful" under Israeli military orders. Notably, the list of charges cited as evidence events dating as far back as decades, including 2000, 2014, and 2017, including his participation in public events. In addition to the arbitrary charges laid against him, the indictment cited unrelated and unreliable testimony of two former employees of a different organization in an attempt to link him, along with the six Palestinian CSO's subject to the Israeli Occupation's escalated harassment campaign, to "terrorist activities."

The confirmation hearing for the administrative detention order was set to 9 December 2021, then postponed to 14 December. Yet, in light of the farcical military judicial proceedings poorly masking Israeli occupation authorities' persecution attempt, Mr. Khairi announced in a letter, on the same day, his intent to boycott all further military court proceedings. Mr. Khairi writes, "In order to harmonize myself as a lawyer and a man of law, I see this procedure of transferring me to administrative detention, regardless of its duration, as contradicting the most basic of human rights to defend oneself and to see the charges laid against oneself, and that is in violation of international law...I ask that my defense lawyer, Adv. Mahmoud Hassan, not represent me before such courts."

The arbitrary arrest and persecution of 79-year-old HRD Bashir Khairi come amid the Israeli occupation regime's latest unprecedented and blanket attack on Palestinian civil society, beginning 19 October 2021, with the criminalization of six of the most eminent Palestinian CSOs engaged in critical human rights work in the occupied Palestinian territory (oPt). The blanket criminalization of Addameer and five other Palestinian civil society organizations, based on alleged "secret evidence," was widely denounced by international human rights organizations and UN bodies as a "frontal attack on the Palestinian human rights movement," constituting political persecution devoid of any legal basis.

The unabashed and escalatory move to forcibly shut down the six organizations follow Israeli occupation authorities' failed past attempts in May 2021 to lobby European nations to cut funding to the groups based on a "secret dossier" alleging links to the Popular Front for the Liberation of Palestine. An investigation of the dossier, obtained by the Intercept, reported that the dossier is primarily based on Israeli interrogations of two former employees, including one accountant, working for a separate, seventh Palestinian civil society group and who had been fired after being suspected of financial misconduct. Their testimonies, largely unrelated to the six organizations, are also unreliable; a lawyer for one of the accountants said the testimonies were "gathered under duress."

Nevertheless, Israeli occupation authorities continue their longstanding systematic harassment campaign against Palestinian civil society, persisting in their attempts to criminalize the six targeted Palestinian CSOs further. On 17 November 2021, an Israeli military court sentenced 63-year-old Juana Rashmawi, Spanish aid worker and fundraiser manager for the Health Work Committees (HWC), a prominent Palestinian CSO providing health services for hundreds of thousands of Palestinians, and which was outlawed by the Israeli military orders, according to a plea bargain. The Israeli military prosecutor illicitly amended the indictment to include background paragraphs unrelated to Rashmawi, alleging links between the six targeted Palestinian CSOs and the PFLP.

The blatant politically-motivated amendment, immediately leveraged by the Israeli 'Defense' and Foreign Ministries to justify their criminalization of the organizations, prompted Rashmawi's lawyer Avigdor Feldman to submit a letter to the court denouncing the modified indictment. In a rare move, the Israeli military court publicly refuted these claims, limiting the sentence to the charges outlined in the original indictment, which solely relate to the HWC, and notes that she was unaware of the alleged intended transfer of funds accepted by Rashmawi in her plea deal. Juana Rashmawi's case prominently showcases Israeli occupation authorities' attempts to coerce and attain individual HRDs' criminalization under an Israeli military judicial system absent of fair trial guarantees and rife with ill-treatment, arising to torture, so as further to justify their arbitrary criminalization of Palestinian civil society.

Similarly, the arbitrary arrest and continued detention of 79-year-old lawyer and HRD Bashir Khairi reflects Israeli occupation authorities' persistent endeavors to incarcerate him in an attempt to coerce testimony and/or a plea bargain to more broadly criminalize entire Palestinian CSOs. This is especially highlighted by the arbitrary and dated charges against him, which, when proven insufficient to incarcerate him, is subsequently turned into an administrative detention order without charge or trial.

Administrative detention is the most extreme measure that international humanitarian law allows an Occupying Power to use against residents of occupied territory. International conventions clarify that an Occupying Power may only use administrative detention against protected persons for "imperative reasons of security" (Fourth Geneva Convention, Art.78).

The Israeli Occupation's systematic and arbitrary administrative detention practices stand in stark violation of international law, particularly relating to internationally recognized principles of a fair trial and its extensive use as a form of collective and criminal punishment. Israeli occupation authorities continue to place Palestinians under administrative detention indefinitely based on 'secret material' that is neither disclosed to the detainees nor their lawyers. In addition, administrative detention is regularly employed as a coercive and retaliatory measure targeting Palestinian activists, civil society members, students, former prisoners, and their family members.

To this end, the UN Special Rapporteur Michael Lynk noted that the Israeli Occupation's illegal practice of administrative detention, in which Palestinians are deprived of their liberty "without charges, without a trial, without knowing the evidence against her or him, and without a fair judicial review," further calling on Israel, as the Occupying Power, "to abolish its practice of administrative detention, [and] release those detainees it presently holds."

13-11-2022
Addameer Submits Testimony during the Commission of Inquiry on the oPt and Israel's Public Hearings
09-11-2022
Palestinian Organisations to COP27: Climate Justice Demands Free Civic Climate Space
13-11-2022
Addameer Sends a Submission to the United Nations Special Rapporteur on the Situation of Human Rights in the Palestinian Territories Titled “Illegal and Arbitrary: The Deprivation of Liberty of Palestinians in Occupied Territories”
متوفر باللغة العربية