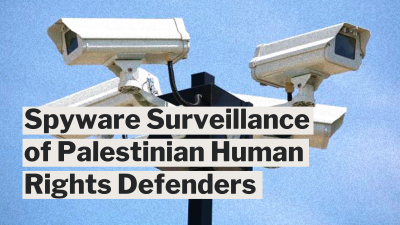 After the Israeli designation of six of the leading Palestinian civil society organizations; Addameer Prisoner Support and Human Rights Association, Al-Haq Law in the Service of Man (Al-Haq), Bisan Center for Research and Development, Defense for Children International-Palestine, the Union of Agricultural Work Committees, and the Union of Palestinian Women's Committees, as "terror organizations" in a latest bid to delegitimize their image and isolate them from their partners and solidarity networks, Front Line Defenders (FLD) reveals today that there has been a systematic underground campaign of spyware surveillance aimed at infiltrating Palestinian human rights defenders and lawyers' devices. The penetrating and monitoring of the devices of human rights defenders violates not only the privacy rights of human rights defenders and lawyers but also the countless victims that have been in any sort of communication with them. The six organizations strongly condemn the arbitrary, oppressive, and distressing revelations of spyware surveillance mass operation and call for a firm response, including concrete actions from the international community.\

On 16 October 2021, Al-Haq contacted FLD on suspicion of the spyware infection of the iPhone device of one of its staff members. FLD technical investigation found that the device had been infected in July 2020 with Pegasus spyware marketed by the Israeli NSO Group. Further forensic investigation-peer-reviewed by Citizen Lab and Amnesty International's Security Lab - of 75 iPhone devices belonging to Palestinian human rights defenders and employees of civil society organizations revealed that at least five additional devices were also tapped into. Amongst them, Ghassan Halaika, Jerusalem-based field researcher at Al-Haq; Ubai Al-Aboudi, Executive Director at Bisan Center for Research and Development; and Salah Hammouri, lawyer and human rights defender.

"When Pegasus is installed on a person's phone, an attacker has complete access to a phone's messages, emails, media, microphone, camera, passwords, voice calls on messaging apps, location data, calls, and contacts. The spyware also has the potential to activate the phone camera and microphone and spy on an individual's calls and activities." (FLD, 8 November 2021).

Joint investigation of FLD, Citizen Lab, and Amnesty International's Security Lab confirmed with high confidence that the infection emanated from Pegasus Spyware pertaining to the Israel-based Pegasus spyware, which has been used as a mass surveillance tool to target and facilitate systematic repression of human rights activists, lawyers, journalists, and political figures, as disclosed by the global Pegasus Project that analyzed more than 50,000 phone numbers in July 2021. After the scathing revelations made by the Pegasus Project, the NSO Group ironically alleged that the Pegasus spyware's use was limited to government intelligence and law enforcement agencies for counter-terrorism and crime-fighting purposes.

On 3 November, the US Department of Commerce announced the placement of NSO Group on its "entity list," effectively banning the business, noting that "these tools have also enabled foreign governments to conduct translational repression [and that] such practices threaten the rules-based international order." Notably, despite agreements with the United States and France to not surveil their citizens, in the case of Ubai Al-Aboudi, and Salah Hammouri, the company has breached these agreements consecutively. Shrinking Our Space, Violating our Right to Privacy On 19 October, the Israeli Minister of Defense designated six organizations of the Palestinian civil society as "terror organizations" under Israel's domestic Anti-Terrorism Law 5776-2016. Two weeks later, on 3 November, the Israeli military commander in the West Bank issued five separate military orders announcing the organizations as "unlawful" under the Defence (Emergency) Regulations 1945, which Britain had notably repealed shortly before the end of the Mandate and which Israel has illegally resurrected to implement numerous persecutory acts against the protected Palestinian population.

This announcement outlawing the vital work of the Palestinian organizations places them at imminent risk of forcible closure and their employees at risk of arbitrary arrests and detention. Further, it represents an alarming effort to criminalize and undermine their efforts in furthering the realization of Palestinian human rights and the pursuit of accountability through international mechanisms by discrediting their essential work, isolating them from the international community, and eventually cutting their sources of funding. In practice, the designations laid against the Palestinian organizations empower Israel to shut down their offices, seize their assets, including bank accounts, and arrest and detain their staff members.

The parallel timelines of the FLD investigation and the Israeli designations are concerning. The Israeli Minister of Defense's designations of the civil society organizations only days after the initiation of this investigation may amount to an attempt at preemptively withholding evidence of surveillance and covering up surreptitious spyware actions.

The systematic surveillance of Palestinian human rights defenders comes in addition to an already unacceptable endless list of coordinated actions led by Israeli governmental bodies and their affiliates to instigate and perform systematic and organized smear, intimidation, and persecution campaigns against Palestinian civil society. Over the past decades, such techniques have included defamation campaigns aimed at labeling human rights defenders as "terrorists," incitement to racial hatred and violence, hate speech, arbitrary arrests, torture and ill-treatment, death threats, travel bans, residency revocations, and deportations.

In February 2019, Al-Haq submitted a report on Israel's surveillance industry to the UN Special Rapporteur on the Promotion and Protection of the Right to Freedom of Opinion and Expression. Drawing on the surveillance apparatus used in the apartheid wall and operated by Elbit and the Mabat 2000 surveillance project in the Old City of Jerusalem, the submission shed light on the interrelations between the Israeli military and the Israeli private surveillance industry. It further addressed the alarming use of Pegasus spyware to muffle human rights defenders in various countries, including Bahrain, Kazakhstan, Mexico, Morocco, Saudi Arabia, and the United Arab Emirates.

Persecution of Human Rights Defenders, A Tenet of Israel's Apartheid

To begin, Israel, as a State party to the International Covenant on Civil and Political Rights (ICCPR), has obligations under Article 19 to protect everyone's rights to privacy, opinion, and expression and everyone's right to hold opinions without interference and to seek, receive and impart information and ideas of all kinds, regardless of frontiers and through any media of his choice. The right to freedom of opinion and expression is also ensured under Article 19 of the Universal Declaration on Human Rights and Article 5 of the International Convention on the Elimination of All Forms of Racial Discrimination.

Further, Article 17(1) of the ICCPR provides that "[n]o one shall be subjected to arbitrary or unlawful interference with his privacy, family, home or correspondence." In terms of surveillance, the UN Human Rights Committee has warned that "Attacks on a person because of the exercise of his or her right to freedom of expression may not be justified by Article 19 (3)" and has underscored the importance of protecting "persons who engaged in the gathering and analysis of information on the human rights situation and who published human rights-related reports, including judges and lawyers" .2 Further, States obligations to protect human rights defenders, amongst others, from third party interference is provided for under Article 2 of the ICCPR, which imposes an obligation on States to respect and to ensure to all individuals within its territory and subject to its jurisdiction the rights recognized in the Covenant. While Article II (c) of the Apartheid Convention prohibits the crime of apartheid, "Any legislative measures and other measures calculated to prevent a racial group or groups from participation in the political, social, economic and cultural life of the country…, in particular by denying to members of a racial group or groups basic human rights and freedoms, including…. the right to freedom of opinion and expression, and the right to freedom of peaceful assembly and association".

Business companies do not operate in a human rights-free vacuum. The UN Guiding Principles on Business and Human Rights codify States' duties to protect and corporate responsibility to respect human rights in the course of corporate activities. In particular, business companies must implement "policies and processes appropriate to their size and circumstances, including (b) a human rights due diligence process to identify, prevent, mitigate and account for how they address their impacts on human rights," as per Principle 15. To that extent, according to Principles 17 to 21, human rights due diligence requires that the company carries out proper and regular human rights impact assessments, reported, and integrated into the company's code of conduct. In conflict-affected areas, this requirement for due diligence is heightened. Israel, accordingly, has a responsibility to prevent companies such as Pegasus domiciled under its jurisdiction from carrying out grave violations of human rights law in its surveillance of Palestinian human rights defenders in the occupied territory.

#StandWithTheSix, before They, Become Hundreds

It comes with great concern that two weeks after the sinister designation of six Palestinian civil society organizations as "terrorist organizations," at least six Palestinian human rights defenders are found to have had their most fundamental freedoms infringed by surveillance practices that have infiltrated all aspects of their private and professional life and the lives of all the victims they serve, in addition to endless communications with international and national officials, journalists, lawyers, and colleagues. This latest revelation shows, once again, the extent of Israel's failure to regulate an egregious surveillance industry in its territory, allowing private human rights-violating surveillance industry to operate with impunity. Such impunity is a global human rights issue that requires a concerted global response on behalf of the international community as a whole.

In light of the unprecedented gravity of Pegasus Spyware multilayered intrusion into Palestinian human rights defenders' space and privacy, the six organizations urge the international community to provide immediate protection of all the identified victims of this Spyware surveillance infiltration and the immediate cessation of any ongoing spyware infiltration.

We further urge the international community to take immediate actions to bring Israel, the home State for Pegasus Spyware, into compliance with its obligations under international law, in particular:

● Require an immediate moratorium on the sale, transfer, and use of all forms of surveillance technology, particularly NSO Group's Pegasus spyware, until a full independent investigation of its operation within Palestine is carried out by the UN, in order to identify the scope of its surveillance activities carried out against Palestinian human rights defenders, and their ties to the Israeli government;

● Require a full audit of Israeli companies manufacturing surveillance equipment, and define their connections to the Israel governmental bodies, as well as their involvement in human rights violations in Palestine and globally; and

● Demand the designing and implementation of a strict regulatory framework to prevent, mitigate and redress the human rights impacts of the surveillance industry, and ensure their compliance and conformity with international human rights law, especially with the principle of human rights due diligence enshrined in the UN Guiding Principles on Business and Human Rights.

The six organizations call on:

● The UN Human Rights Office to report on mass surveillance companies operating with Israeli settlements in the occupied Palestinian territory, and include them in the UN Database on Business Activities;

● All States to immediately freeze their business agreements on weapons and surveillance equipment with Israel and demand that Israel report on its ties to its surveillance industry;

● The Prosecutor's Office of the International Criminal Court to include the surveillance of Palestinian human rights defenders into its current investigation on the situation in the State of Palestine, as a means of persecution of those defenders who oppose its apartheid regime; and

02-02-2023
In a Joint Submission to the UN Commission of Inquiry, Palestinian Organizations Highlight Israeli Policies to Entrench and Maintain its Settler-Colonial and Apartheid Regime
24-01-2023
Commemorating the International Day of Education by Highlighting the Reality of the Right to Education for Palestinian Political Prisoners
14-12-2022
Urgent Appeal to Commercial Airlines: Avoid Assisting in the Forcible Deportation & Transfer of Human Rights Defender Salah Hamouri
Available in English
متوفر باللغة العربية
Disponible en Español
متوفر باللغة العربية