In the Past 5 Days: Israel Kills 5 Palestinians and Arrests 187 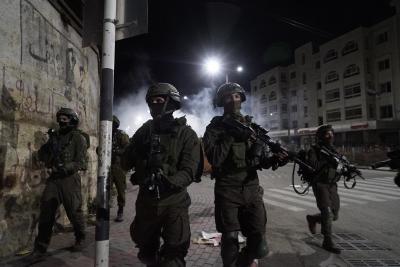 Since 12 Dec 2018, Addameer documented 187 arrests in the West Bank including East Jerusalem, extrajudicial killings of five Palestinians, and the unlawful demolition of two Palestinian homes. Harassment and violence against Palestinians are still ongoing.

·         12 Dec 2018: According to Israeli announcements the Israeli occupation forces executed Saleh al-Barghouthy (29 years old) from Kobar, a village near Ramallah. The execution happened after Saleh’s arrest. According to eyewitnesses, Saleh was in Surda village near Ramallah driving his taxi when an Israeli special force group (undercover forces) attached the taxi and arrested him unhurt. Until this day, there are no clear details about Saleh’s execution, since his body remains with the Israeli occupation forces.

·         13 Dec 2018: Ashraf Na’alweh (23 years old) from al-Shwekeh, Tulkarem was killed by Israeli occupation forces and his body was kidnapped by them. Ashraf was hiding in a home inside Askar refugee camp located in Nablus when he was killed. Ashraf’s father, mother and brother are in Israeli prisons waiting for their sentences. Also, Ashraf’s brother in law is still in Petah Tikva interrogation center. Ashraf’s home was demolished by Israeli occupation forces on the morning of 17 December 2018.

·         13 Dec 2018: Hamdan al-Ardeh (60 years old) was killed by Israeli occupation forces while he was driving his car in al-Biereh’s industrial zone. Israeli occupation forces claimed that Hamdan was attempting to attack soldiers through running them over. Though, later on, Israeli authorities announced that they were mistaken and Hamdan just had a car accident.

·         13 Dec 2018: Majd Metar (25 years old) from Qalandia refugee camp, was killed in East Jerusalem in the morning after claiming that he attempting to stab Israeli forces.

·         14 Dec 2018: Mahmoud Nakhleh (19 years old) from al-Jalazon refugee camp was killed by Israeli occupation forced during a demonstration which was happening near the camp.

Addameer considers the killing of those five Palestinians as unlawful extrajudicial killing which is prohibited according to international law and amounts to a war crime. Addameer also considers Israeli forces declaring the death of Saleh Omar al-Barghouthy invalid until a recognition to his body happens.

An extrajudicial killing is an “unlawful and deliberate killing carried out by order of a state actor or with the state’s complicity or acquiescence.”[1] Accordingly, lethal force can only be used as a measure of last resort, and it must always be proportional and necessary. The usage of firearms against a person can only be only used under the imminent threat of death or serious injury. Shooting to kill is only allowed in order to save a life. This requirement would make the use of lethal force proportional and, only if there are no other means to prevent the threat to life, would also make the lethal force necessary.[2]

·         The Israeli occupation forces arrested around 187 Palestinians from several cities and villages in the West Bank, most of those detainees are es-prisoners.  Among them were:

-          Ex-prisoners Sabah Fer’oun, check her profile to learn about her previous arrest.

-          Ex-prisoners Mazen al-Natsheh, check his profile to learn about his continuous administrative detention.

-          21 Palestinian were arrested for their attendance to the wedding of the ex-prisoner Rami al-Fakhouri in Jerusalem. During the wedding, there were some nationalistic songs which are considered incitement according to the Israeli laws. The groom himself is still in al-Mascobiyya interrogation center.

Collective Punishment in Kobar – a village near Ramallah

Just a few hours after the killing of Saleh al-Barghouthy, Israeli occupation group called “al-Yamam” along with a special forces group (undercover) raided Kobar village. The besieged and raided Saleh’s family home and started randomly shooting live ammunition causing three injuries. One of the injured persons was Salah al-Barghouthy (55 years old), who was shot in his leg and then arrested. Salah’s leg later got amputated, after transferring him to a hospital for treatment.

In the same night, the Israeli soldiers held around 100 citizens of the village inside Saleh’s family home. The soldiers kept the citizens until 2:00 am then they released them after holding them for around 6 hours. The Soldiers left after arresting 5 of them including the injured Salah al-Barghouthy and Saleh’s father and brother. Then in the morning the soldiers came back and arrested another 5 citizens of the villages.

-          15 Dec 2018: Special forces (undercover forces) raided the village in the evening, they broke into a phone store and kidnapped the owner.

-          16 Dec 2018: Special forces raided the camp at around 5:00 am, they were followed by a number of military vehicles. They broke into three homes and arrested three citizens.

-          18 Dec 2018: Soldiers raided the village at around 4:00 am, they arrested Saleh’s sister in law Ayat and also her brother. Israeli soldiers have been searching for Saleh’s brother A’sem who is Ayat’s husband.

So far, the Israeli occupation forces arrested 16 citizens from Kobar among them 10 were released and 9 are still in detention, see the below table for more details:

According to Article 33 of the Fourth Geneva Convention and Article 50 of the Huge Regulations the punishment of any individual for a crime he/she did not commit is prohibited, and a violation of this article amounts to a war crime. Addameer considers what is happening in Kobar a war crime and a violation of the rights of the citizens of the village who did not commit any crime but are still getting punished until this day.

On Friday 15 Dec 2018, hundreds of Israeli soldiers raided al-Ama’ry refugee camp in order to demolish the home of Islam Abu Hemaid. The demolition order came from the Israeli Supreme Court after accusing Islam of killing an Israeli soldiers during a soldier’s night raid in May 2018. The family of Abu Hemaid has six sons in Israeli detention, four of them are serving life sentences, one is under administrative detention, and Islam is still waiting for his sentence which may be also a life sentence.

After raiding the camp, the Israeli soldiers empted Abu Hemaid home which was filled with protestors standing in solidarity with the family. The soldiers also empted all the other homes surrounding it, all of those people were taken to al-Biereh’s government school nearby. Around 200 people were held in the yard of the school, those people included elders, women, children and youth who were harassed and some were beaten by the soldiers.

“I was standing peacefully in solidarity with the family outside their home when the soldiers raided the area at around 1 AM. Around 40 soldiers came into the house to kick out the protester, they dragged some of them outside and started putting them in stress positions while handcuffing them. One of the guys refused to be handcuffed so five soldiers attacked him and started beating him all over his body, then they threw him on the street. Before they left him one of the soldiers stepped on his head.”

The eye witness then continued:

“The soldiers then started transferred people in groups, for example taking ten women with their children and transferring them to the school’s yard. Women, children and elders were not cuffed though the environment at the school yard was really difficult and we were around 300 people along with 20 to 30 soldiers inside the yard and 100 outside of it. We were surrounded from all the sides of the yard and it was really cold over there. They held us there for around two hours then after long negotiation with the soldiers they allowed women, children and elders to get inside the school. Though, even inside the school the environment was difficult and it was still cold, one of the women there went into labor and was then transferred to the hospital.

At around 4 AM they allowed men to get inside the school, when the men saw the difficult environment there they started negotiating with the soldier to allow women, children and elders to go the Red Crescent building near the school. After 4 AM only women and children were taken to the Red Crescent building, and youth, men and elders remained inside the school until around 11 AM. They remained there without any water or food until 9:30 when the soldiers allowed Red Crescent staff brought them some water and bread. At around 10 or 10:30 the soldiers started leaving the area.”

The demolition of Abu Hemaid home is not only considered collective punishment measure according to article 33 of the Fourth Geneva Convention, but also this is considered a forcible transfer. According to article 49 of the Fourth Geneva Convention, the occupier is not allowed to transfer a civilian population except in restricted and specific cases. The case of Abu Hamaid home demolition caused direct and forcible transfer for the remaining family members, which is prohibited according to international law and also considered a war crime. Even the new calls in Israel to a have an Israeli Bill to exile the families of those accused of carrying out attacks against Israeli soldiers or settlers is prohibited according to IHL and amounts to a war crime.

Addameer considers this ongoing harassment, violence and violations against Palestinians who are protected civilians to amount to war crimes. We also see that those crimes are systematic and wide-spread which amounts to crimes against humanity as well. These violation will continue and remain ongoing violations if the international community will not take actual measures against the Israeli occupation forces and authorities.

[2] Basic Principles on the Use of Force and Firearms by Law Enforcement Officials, Eighth UN Congress on Prevention of Crime and Treatment of Offenders, Havana, Cuba, 27 August- 27 September 1990, General Provision No. 9.