The Legal Barrage: Gazans and their Indefinite Detention 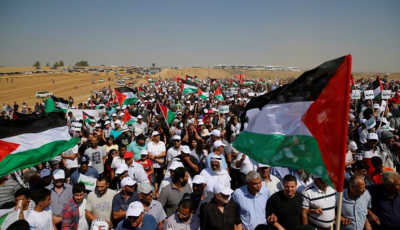 For the eleventh year, Gaza continues to be the world’s largest prison. Imports and entrance to the Strip are restricted; exports and exit permits are dependent on the political climate; and the people of Gaza are the ones who continue to pay the price. Sporadic attacks, and shellings have been ongoing since 2008, with the occupation forces demonstrating a clear disregard for the lives of these already impoverished civilians.[1] In addition to the death of 136 Palestinians in Gaza since March 30, as of 7 July 2018, there have been 81 individuals arrested since the beginning of the year.[2]

In addition to living under blockade, the population of Gaza has been governed by a unique legal regime since the ‘unilateral disengagement’ of 2005. The regime itself is in-keeping with the Israeli claim that the Gaza strip is no longer an occupied territory, and that Israel bears no responsibility for the population within the Strip.[3] Despite the fact that this has been broadly recognized as a legal fiction, Israel engagement with the Strip has been somewhat bipolar since 2005.[4]

On the one hand, it provides a list of what can and cannot be brought into the Strip; it controls who can enter and leave the Strip, with Egypt’s assistance; it controls the population registry and the issuance of id numbers; and it controls the airspace and sea; yet, at the same time, it maintains the assertion that it bears no responsibility for the population, even equating Gaza to a foreign autonomous territory like Syria.[5]

In order to be in keeping with this claim, to arrest individuals, the occupation has been primarily using the ‘Internment of Unlawful Combatants Law 2002’.

With the passing of this law, the Israelis have sought to assert a new legal category of individuals in conflict. Under international law, there are only three categories of persons in a situation of armed conflict or occupation.[6] That is: 1) those who are openly participating in hostilities as part of a regulated militia, including resistance movements with visible insignia, and formal soldiers; 2) those who fall under the scope of the Fourth Geneva Convention as a protected person; and 3) Medics of a military force.  In the eyes of international law, there is no possibility of being categorized in any different way.

The official Commentary on the Fourth Geneva Convention states that:

Over the past century, the nature of warfare has decisively shifted with the majority of armed conflicts following World War 2 involving non-state actors. Despite claims to the contrary, which are often made by states looking to circumvent the laws of war, this shift does not result in a category of combatant that is outside the purview of humanitarian law.[8]

As such, any claims which assert an individual to be an ‘unlawful combatant’ must assign the individual the same rights as that of a protected person who has committed a criminal act, or must somehow find a way to claim that the individual is an active, normal combatant. Any declaration to the contrary is thus a clear violation of international humanitarian law.

The ‘Internment of Unlawful Combatants Law 2002’

The law itself was passed in 2002 in order to codify the detainment of two Lebanese nationals, one of which had been held illegally since 1989 and the other since 1994. They were being held as ‘bargaining chips’, to be used in seeking the return of occupation soldiers after the withdrawal from Southern Lebanon.[9] The High Court, in 2000, ruled against the legality of their detainment, prompting the occupation authorities to release a number of long held detainees.[10]

In response to this ruling, in a common pattern, the occupation Knesset passed the ‘Internment of Unlawful Combatants Law’ with the aim of legalizing its clear violation of international law. The law itself, in Article 2, defines an unlawful combatant as follows:

This individual can then be held on the order of a soldier higher than the rank of brigadier in the Israeli occupation forces. If the soldier in question believes that the details of the order may prejudice ‘State security’, they can choose to not include a reason for the detainment.[12] Initially, the rank of the soldier had to be Chief of Staff or above, though an amendment passed by the occupation Knesset in March 2016 reduced the required rank.[13]

Following the issuance of the order, within 14 days, there must be a judicial review in a District Court. [14] This process must take place every 6 months after the initial approval.[15]

In addition, the law restricts the prisoners ability to respond or provide evidence, or for the evidence against them to be made public. This means that all the information that their interment is based on is secret in nature. Such a restriction is contingent on the judge finding that it’s release may threaten ‘State security or public security’. This makes the process much like that of Administrative Detention, where the evidence held against the individual does not have to be released for their consumption.

Finally, the law asserts that “as long as the hostile acts of such a force” are ongoing, the occupation maintains the legal right to hold the individual. In a context where the occupation is apparently perpetual, and the occupying state has remained under a state of emergency since its inception, this provision provides legal basis for the perpetual interment of anyone deemed to be involved in any way in actions against the occupation.

The law itself serves two main purposes. Firstly, it provides the occupation authorities a domestic legal pretext for their violations of international law. By asserting that there is this apparent ‘fourth category’ of individual, the occupation feels that it has freed itself of the obligation to provide individuals with the privileges ascribed to them under the Fourth Geneva Convention.

Secondly, specifically in regard to its utilization in Gaza, by asserting that individuals in Gaza are ‘unlawful combatants’, not befitting either the Third or the Fourth Geneva Convention, the occupation has sought to provide a greater legal basis for their claim that Gaza is no longer an occupied territory.

The final outcome is that the occupation forces retain total control over the people of Gaza, with an ability to hold them indefinitely with negligible judicial oversight in a clear violation of international law.

[4] Tristan Ferraro, ‘Determining the Beginning and End of an Occupation under International Law’, International Review of the Red Cross, Vol. 94 No. 885, 2012, https://www.icrc.org/eng/assets/files/review/2012/irrc-885-ferraro.pdf

[13] ‘The Wrongful Legislation Trend Continues: The Knesset Adopts a Legal Amendment Making it Easier for the Military to Assign “Unlawful Combatant” Stats’, Hamoked: Center for the Defence of the Individual, March 21 2016, http://www.hamoked.org/Document.aspx?dID=Updates1743.