Joint Monthly Report: 605 Palestinians were arrested in the month of May 2018 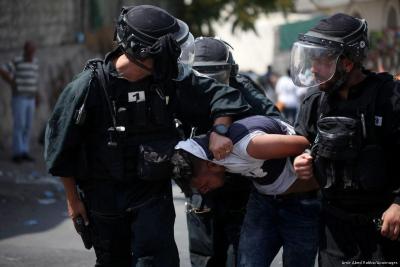 As part of ensuring the accountability of the occupation forces, these organizations publish a joint monthly report that deals with the past month of violations against the Palestinian prisoners and people. Through providing such monthly analyses, the continuous and political nature of these violations are exposed.

The report elaborated that of the 605 Palestinians arrested during the month of May, 94 of these were children and 9 were women.

In regard to the policy of Administrative Detention, there were 83 orders issued this month by the occupation. Of the 83, 36 were new and the rest were renewals.

In regard to the overall figures on prisoners, the number remained stable at around 6000. Of this figure, 54 are female with 6 girls under the age of 18. The number of child prisoners totaled 350. The number of those being held under administrative detention is 430.

The cases of the martyr Aziz Ewisat and the child Hassan Al-Tamimi expose the crimes of the occupation’s prison administration.

The occupation’s prison administration abused and brutally attacked the prisoner Aziz Ewisat. The 53 year old of Jabal Mukaber, was humiliated and hurt all throughout his detention in the cells of Eshel. As a result of the beating, Ewisat was transferred to Ramleh Prision Clinic.

On May 9 2018, while in Ramleh Prison Clinic, Ewisat had a heart attack and was subsequently transferred  to Assaf Harofeh Medical Center due to his being in a critical condition. Ewisat stayed there till he passed away on May 20. 2018. His body is still held captive. It’s worth noting that Ewisat was arrested in 2014 and sentenced to 30 years in jail.

As for the case of the 18 year old Hassan al-Tamimi of Deer Nitham. He was arrested on April 7. 2018, and suffers from kidney and liver problems due to an inability to absorb protein, which has been present since he was a small child. He’s been subsisting on a strict restricted diet and medications for as long as he can remember, but the occupation’s prison administration ignored those needs and restrictions. The occupation’s medical neglectance has cost Hassan al-Tamimi his sight. After causing him to become completely blind, the prosecution decided to release him from jail but to keep his trial ongoing, as a way to try and escape responsibility for his health and medical condition.

Invasions and abuse during arrests.

Israeli Occupation Forces, consisting of 30 military vehicles, a bulldozer,  and a wastewater truck, raided Al Am’ary refugee camp on the dawn of Monday, May 28, 2018. They the besieged a house for over 5 hours, and arrested a 15 year old child. The night raid and siege resulted in clashes at the front entrance of the camp, which ended with 13 injuries according to the Palestinian ministry of health.

Attached is the testimony of Mr. Jamal Suliman Eid, the father of the detained child, Iyad Eid:

“ [w]e woke up at around 6:15 am because of the noises of the occupation forces. A few minutes later, we heard screams coming from my sister’s house, which is right next to ours. Then we saw the occupation forces arresting my 2 nephews, Firas and luay, after beating, blindfolding and handcuffing them. After a while, they broke down our door and attacked my son Iyad. One of the soldiers covered Iyad’s mouth, so Iyad started screaming telling them to stay away from him since he’s sick. The soldiers didn't care and kept hitting him in front of me. There were 15 soldiers inside the house, some of them attacked Iyad and kept beating him with their weapons and fists, the other part went through the house. The soldiers then handcuffed both my son and I with plastic handcuffs and dragged us down to the ground floor of the building where I saw my nephews still blindfolded and handcuffed.”

The report highlights that what the occupation does to Palestinians during and after arrest is an essential part in the collective punishment policy that is being implemented by the IOF, which is a clear violation of articles 44 and 34 of the 4th Geneva convention.

The “Nahshon” forces and the continuous attacks on minors.

The complaints regarding humiliation and abuse perpetrated by the “Nahshon” forces increased from child prisoners in the prisons of Megiddo and Ofer. During the lawyer’s visits in May, they reported bruises and clear signs of abuse on the children's bodies.

It’s worth noting that Nahshon forces are ‘special forces’, that have their own distinct uniform, and includes well trained, experienced soldiers. These forces are located in special centers, and are called up when there is instability in prisons. The units main tasks include moving prisoners, from one prison to another,  or from court to prison, as well as moving sick prisoners and keeping the prisons under control. The unit is specifically used to break the will of prisoners, and ensure their compliance with the prison administration.