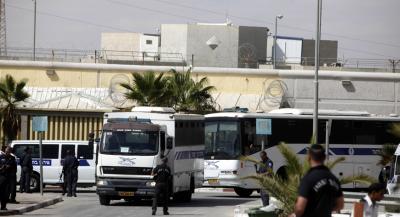 Despite these unequivocal legal provisions, Israeli occupying forces systematically transfer Palestinian detainees from inside the occupied West Bank, including East Jerusalem, to locations inside Israel. Upon arrest, Palestinians are typically taken to one of four interrogation centers or one of four detention centers across the occupied territory and within the occupying state, and ultimately to one of 17 prisons. Only one of these prisons is located inside the occupied territory. This systematic and illegal transfer of Palestinians from the occupied territory also carries with it a human impact – the consequence is that Palestinian relatives of prisoners and detainees who then require a permit to enter Israel are regularly denied family visitation permits, based on “security grounds”. From observations by Addameer based on accounts of family members, these permits are systematically denied for male family members aged between 16 and 35. Overall, the ongoing deportation of Palestinians detainees presents not just significant human implications, but also operates as part of a wider Israeli impunity for international crimes which threatens to erode the relevance of international law generally.

Palestinian prisoners who are transferred from the Gaza Strip and into Israel are subjected to arbitrary measures depriving them of their fundamental human rights, arguably as acts of collective punishment during wars on Gaza and its resident population. For example, in 2006, Israel denied Palestinians living in Gaza family visits based on “unspecified security reasons”. In 2009, the Israeli Supreme Court (sitting as the High Court of Justice) rejected an appeal that contested the legality of this policy claiming that Palestinians from Gaza have no right to enter Israel.[1] In 2014, these visitations were reinstated but with restrictions applied, and only up to once a month.

THREATS OF DEPORTATION DURING INTERROGATION

Threats of deportation are used by Israel during interrogation as a form of pressure in order to coerce Palestinian detainees into providing a confession. On October 25 2013, occupation forces arrested 21-year-old Rana Abu Kweek, after a night raid on her home in Ramallah. Rana’s hands were tied behind her back, and she was blindfolded and taken to a military jeep. Inside the jeep she was forced to lay down facing the floor. At an unknown military base she was blindfolded for three hours and then taken back to the jeep. Several hours later she arrived at a military checkpoint, and then transferred to Ashkelon, where she was denied food and access to the bathroom. She recounted:

“I arrived Ashkelon detention center by the evening. Shortly after arrival, a long interrogation began. It lasted until the next day. I would be allowed to have short breaks in between, each break lasting less than 30 minutes, followed by a new round of interrogation. I was threatened to get deported to Gaza if I did not ‘confess’….”

Mohammad Rabe’, who was arrested on July 27 2014 near Bitar checkpoint in close proximity to his village in Bethlehem recounted:

Mohammed Khatib from Hebron, a food supplies sales agent, a married man and father of a baby girl, who was arrested on 17 June 2014 and was subsequently subjected to 39 days under interrogation, recounted his interrogation at Petah Tikva:

“I was handcuffed to the sides of an interrogation chair, and they were threatening to bring all the members of my family, and demolish the house, and threatened to beat and imprison me for long periods and with deportation to Gaza.”

DEPORTATION TO GAZA AS A CONDITION OF RELEASE

Deportation to the Gaza Strip is also used by Israeli forces as a condition of release. On 31 January 2012, occupation forces re-arrested 38 year old Ayman Al-Sharawneh from Hebron, in the West Bank, under article 186 of Israeli Military Order 1651 - which allows the re-arrest of prisoners who were released under prisoner exchange deals - based on “secret information”. Al-Sharawneh had been released in the Wafa Al-Ahrar exchange deal after spending 10 years in Israeli prisons. He was sentenced to serve the remainder of the 28 years of his original sentence, based on information to which he and his attorney did not have access. Al-Sharawneh announced a hunger strike on 01 July 2012, and after a partial hunger strike of 260 days, he was released on 17 March 2013 and deported to Gaza for a period of 10 years, as a term of his release.

Iyad Abu Fannoun, from Battir village in Bethlehem, was also arrested on 24 April 2012, by Article 186 of Military Order 1651, after having been released under the 2011 prisoner exchange deal, and having spent eight years in Israeli prisons. He was deported on 04 July 2013 to the Gaza Strip after completing a deal for release stipulating deportation of 10 years to the Gaza Strip. Hunger Striking administrative detainee Hana Shalabi from Jenin, who was on hunger strike for 43 days in protest at her continued detention without charge or trial, was deported on 01 April 2012 to the Gaza Strip as a condition of her release. This period of deportation was set at three years. By the end of 2013, occupation forces had deported the following four Palestinians to the Gaza Strip: Hana’ Shalabi, Ayman Al- Sharawneh, Iyad Abu Fannoun, and Ayman Abu Daoud, following long periods on hunger strike.

Currently, as of March 2016, the Israeli Knesset is seeking approval of the deportation of family members of Palestinians who allegedly committed attacks against Israeli police forces, soldiers, settlers, or civilians to the Gaza Strip, in contravention of the prohibition against the deportation of protected individuals as stipulated in Article 49 of the Fourth Geneva Convention. This policy would also constitute a measure of collective punishment, which is prohibited under international human rights and humanitarian law.

Though Article 49 of the Fourth Geneva Convention does provide certain, limited grounds under which temporary evacuations of civilians are permitted, “[s]uch evacuations may not involve the displacement of protected persons outside the bounds of the occupied territory except when for material reasons it is impossible to avoid such displacement.”[3] The requirement that “any sentence of imprisonment must be served in the occupied territory itself [as per Article 76] is based on the fundamental principle forbidding deportations laid down in Article 49”.[4] In the case of Israel’s deportation of Palestinian detainees from the West Bank, it cannot be reasonably contended that material reasons exist which render the imprisonment of Palestinians inside the West Bank an impossibility. To the contrary, Israel’s ability to detain Palestinian prisoners inside the West Bank is one clearly demonstrated by the presence and use of Ofer prison, for instance, for this precise purpose.

In response to petitions submitted by human rights groups, highlighting the illegality of Israel’s deportation of Palestinian detainees, the Israeli Supreme Court has held that such deportations are lawful insofar as Israeli domestic law – which permits such deportations – takes primacy over international law in the event of any direct conflict between the two. Such a position, however, represents a clear contravention of Article 27 of the Vienna Convention on the Law of Treaties, which asserts that a party may not invoke the provisions of its internal law as justification for a failure to perform a treaty obligation.

Unlawful deportation is an act which confers legal obligations on third party states, with Common Article 1 of the Fourth Geneva Convention stipulating that “The High Contracting Parties undertake to respect and to ensure respect for the present Convention in all circumstances”. Commentary from the International Committee of the Red Cross develops this provision further, concluding that Common Article 1 is “generally interpreted as enunciating a responsibility on third States not involved […] to ensure respect for international humanitarian law by the parties to an armed conflict by means of positive action. Third States have a responsibility, therefore, to take appropriate steps — unilaterally or collectively — against parties to a conflict who are violating international humanitarian law, in particular to intervene with states or armed groups over which they might have some influence to stop the violations.”[5] Furthermore, as a grave breach of the Fourth Geneva Convention and thus one of the most heinous classifications of war crime, High Contracting Parties are obligated to search for individuals alleged to have committed – or to have ordered to be committed – acts of deportation, and to bring such persons before a domestic court or, alternatively, to hand such persons over to another High Contracting Party so that they may be brought before a court of law.[6]