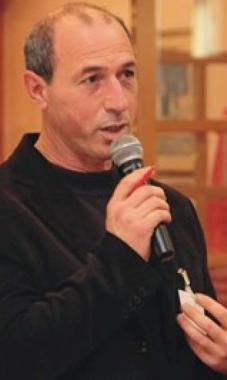 Omar Nazzal was arrested at Al-Karama Bridge while en route to participate in The European Federation of Journalists General Meeting; he was traveling to the conference to represent the Palestinian Journalists Syndicate. Occupation forces detained Nazzal in Etzion detention center near Bethlehem immediately following his arrest. A few days later, he received a four-month administrative detention order.

Nazaal was previously held in administrative detention: for a year in 1977 and for a year and 4 months in 1985 and 1988. In addition, occupation forces arbitrarily placed him under house arrest in 1986 and issued a travel ban against him in 2014 which remained effective until his most recent arrest (on 23/4/2016).

Nazzal is the director of ClacketMedia and communications office in Ramallah. He is also a freelance journalist and writer and a member of the General Secretariat of the Palestinian Journalists Syndicate, which he has represented at many local and international events. Nazzal is a board member of several local organizations including but not limited to: Mada the Palestinian center for development and media freedoms, Amin Media Network, etc.  He is also the founder of  ‘Wattan TV—the first Palestinian TV station.

Nazzal is currently being held in Ofer Prison, where he is keeping a series of diaries and writing about the daily life of prisoners. He is also working on a study that reassesses the role of media can play in supporting prisoners’ issues, all while giving media workshop trainings to other prisoners.

The regional military commander issued an order (on 2/5/2016) to administratively detain journalist, Omar Nazzal, for four months (from 2/5/2016 to 22/8/2016) due to his alleged organizing with the PFLP, thereby posing a threat to regional security according to the claims of occupation forces

The first judicial review hearing took place at Ofer Military Court on 8/5/2016 in front of the military judge, Ron Dloomy, in the presence of the detainee, his lawyer, and the military prosecutor. The latter asked the judge to sentence Omar to the full detention period due to his membership in the PFLP—a group that the Israeli military has banned (along with all other Palestinian political parties).

During his defending argument, however, the detainee’s lawyer, Mahmoud Hasssan, emphasized that Nazzal had not been arrested since 1988, and that he was never summoned for interrogations or investigation on security grounds ever since; secondly, that Nazzal has been working as a journalist for years and has been a member of the Palestinian Journalists syndicate for six; and that he is a representative of the national syndicate to the International Journalists’ Network (IJNET). Through this work, the lawyer argued, Nazzal is required to participate in various events and meet with a variety of individuals to gain access to verified information as a journalist. The lawyer further clarified that there is absolutely no evidence that Nazzal had deviated from his responsibilities as a journalist, and that his arrest was therefore a political one –targeting Nazzal for his exposing journalism.

During this same hearing, Nazzal presented his own remarks towards the end of the court session. He  iterated that as a journalist he is privy to freedom of speech and expression and objected to the obstruction of these freedoms by the Occupation forces and Palestinian authorities alike. Nazzal also pointed out that his arrest came after he was invited by the Bosnian government to participate in The European Federation of Journalists General Meeting; and that he was arrested while en route to representing the Palestinian Journalists Syndicate at this international conference. Thus, Nazzal concluded, his arrest was a political one—aimed at preventing his participation and access to such an international platform.

That the military court sentenced Nazzal to the full detention period – without any incriminating evidence nor any serious investigation into the accusations– only confirms that Occupation forces use administrative detention in a way that is completely arbitrary and contrary to all international human rights and conventions, particularly article 78 from the fourth Geneva Convention. The military court’s detention sentence also violates Article 23 of the Universal Declaration of Human Rights, which guarantees everyone the right to work and the right to free choice of employment under just and favorable conditions. Moreover, the detention sentence infringes upon Nazzal’s freedom and his rights to free expression. As a well-known media activist and defender of human rights, his arrest is a scandalous infringement of the Universal Declaration of Human Rights and the Universal Declaration on the Protection of Human Rights Defenders. His sentence also violates Article 19 of the International Covenant on Civil and Political Rights, and items 1 and 2 in particular which emphasize the right of everyone to hold opinions without interference; and the freedom to seek, receive, and impart information and ideas of all kinds, whether orally or in print, or any other form of his choice.

Recently, and ever since occupation forces issued hundreds of administrative detention orders against numerous sectors among the Palestinian people, the occupying state has heavily targeted activists, human right defenders, and journalists.  Today, 19 Palestinian journalists are languishing in occupation jails, including five who were imprisoned by administrative detention orders.

Nazzal is married to Marline Rabadi who works as a researcher and freelance trainer. He has three daughters, Safad (25 years old), Marah (16 years old) and Ghazal (15 years old). Nazzal’s family is worried about his administrative detention and the unpredictable possibility of its renewal.