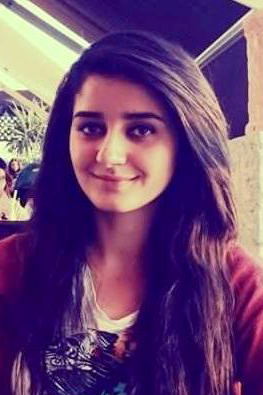 Lina was arrested on 13 December 2014 near Ofer military base in Beitunia/Ramallah.  A report by Palestine Today Television shows a video of her arrest, in which a large number of number of soldiers stormed her and dragged her to a military jeep. Lina reported that one of the soldiers pulled her from the back so violently that he ripped her shirt and caused her arm to bruise.  The soldier dragged her to a military jeep while another twisted her arm until they arrived to Ofer prison.

When Lina arrived to Ofer prison, the soldiers shackled her arms and legs with iron shackles and made her wait on a bench for two hours. Then, she was taken into an underground room and interrogated. The soldiers accused Lina of participating in an illegal demonstration and throwing stones at Israeli soldiers. Lina denied all of the charges and maintained that she was in the area to visit a friend who lived near the prison. Although the interrogation session was recorded, Lina was forced to sign a paper in Hebrew, a language she cannot read. When the interrogation ended Lina was searched by a female soldier and then shackled again. She was left outside the prison for about three hours and then transferred to HaSharon prison by military bus. Lina arrived at HaSharon Prison at 11:30 PM and was put in solitary confinement until the next day when she was transferred to the cells with other Palestinian female prisoners.

Lina was charged ten days after her arrest. The list of charges included rock throwing at a military vehicle during a demonstration near Ofer prison on 13 December 2014, the day of her arrest. The prosecution claimed that the right mirror of the vehicle was broken as a result.

When Lina was formally charged, the military prosecution demanded she remain detained until the end of legal procedures. Her lawyer, Adv. Mahmoud Hassan requested her release on bail so that she can continue to attend university during her trial. However, all the proposals and alternatives to detention proposed by the defense were rejected by the military judge Rani Amer, who claimed that Lina committed a dangerous crime. He also added that if he were to release Lina, she will consider her actions (of participating in a demonstration and throwing stones) acceptable. He added that many Palestinians do not find Lina’s behavior wrong and instead, encourage it.

The judge’s comments signify the military court’s intent to use Lina as an example to deter other university students and youth from attending demonstrations, despite the lack of evidence against her. This policy is widely used by the Israeli military courts who rarely release Palestinians on bail during trial and is also telling of political purposes of the courts to crush Palestinian resistance.

Lina had 11 hearings in Ofer military court, almost all of which were to extend her detention and delay the trial. This is an unstated policy in the military court to delay hearings for months at a time, denying Palestinians their right to a speedy trial. Hundreds of Palestinian children and university students are held in detention for months or sometimes over a year before their sentencing.

The military appeal court rejected the appeal to release Lina on bail, disregarding the legal arguments that Lina is young, that this is her first arrest and that she denied the charges against her. While the military court usually does not release detainees on bail, in cases similar to Lina’s there has been precedence of dozens of cases where the detainee was released on bail until the end of legal procedures.

The first witness testimonies heard in Lina’s case were in a hearing on 16 February 2015. The prosecution presented a soldier who was driving the military jeep who claimed he saw Lina throwing rocks as the first witness. During the hearing, the court discovered that the three prosecution witnesses had coordinated their testimonies prior to the hearing, which is a fundamental violation of the judicial process. Therefore, the military judge requested the military prosecutor to reach a plea bargain with the defense instead of continue with the trial.

The prosecution initially demanded a two year prison sentence for Lina. Ultimately, Lina was sentenced to a six month prison sentence, a fine of 6,000 NIS (about 1,500 USD) and a six month suspended sentence for six years. The military court also added a new condition to the bargain, a rare occurrence, which stipulates that if Lina participates in any similar offenses within the next three years, she will pay a 3,000 NIS fine.

While the coordinated testimonies of the soldiers ultimately changed the outcome of the trial, it should be mentioned that the military jurisdiction clearly shows that Lina was considered “guilty until proven innocent.”

The military court decisions strongly rely on the political conditions at the time of the hearing to determine the penalties against the detainee. In many cases, the sentencing or fines increase depending on the political situation and the level of popular resistance. For instance, in the second half of 2014, after the assault on Gaza and the kidnapping and murder of Mohammad Abu Khdeir by Israeli settlers in Jerusalem, protests sparked across Palestine, especially in Jerusalem where Mohammad Abu Khdeir resided. As a result, the Knesset proposed a law for harsher penalties for stone throwing under Israeli criminal law in Jerusalem to mimic Israeli military law in the West Bank. The new legislation now imposes a maximum penalty of ten years for throwing stones at a moving vehicle if harm was not intended, and twenty years if harm was intended. The proposed change has been approved in the first reading in the Knesset Ministerial Committee for Legislation.

The military courts are political courts that are far from being neutral. They rely on the political decisions of the occupations’ leaders, a gross violation of the Geneva Conventions. The changed legislation in Jerusalem and Lina’s arrest for alleged stone throwing demonstrate the occupation’s attempt to curtail protests as well as arrest Palestinians with harsh sentences with little or no substantial evidence. Lina’s trial is evidence of this.

Lina was detained in HaSharon prison near Yafa, but her court hearings were in Ofer military court near Ramallah. Lina reported to Addameer’s lawyers that travelling to Ofer takes an entire day. For each hearings She leaves HaSharon prison at 3:00 AM and arrives at the court at 10:00 AM. Her legs are shackled for the duration of the trip, and the long trip and uncomfortable conditions make her exhausted by the time she returns to the prison.

Currently, there are 22 Palestinian females in prison, including 4 child detainees under the age of 18. They live in inhumane conditions and are not afforded their basic needs. They also suffer from harassment, punishments and lack of family visits. As of now, Lina’s family has been unable to obtain permits to visit her because of the security and administrative procedures that have been drawn out.

Lina is a first-year student at Birzeit University studying media and journalism. She has been a dancer in the El-Fanoun Palestinian Popular Dance Troupe since 2011. The troupe performs the traditional Palestinian dance “dabke” to revive Palestinian heritage. Most recently she performed a dance called “Tallat” in a show a few days before her arrest.

Lina’s family members are refugees originally from Qalonia village in the 1948 territories. Lina’s father Mohammad has been arrested several times. She lives with her father, mother,Samira Khattab,, two sisters Nadia and Aa, and her brother Atta.