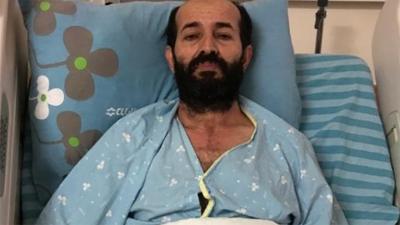 Mr. Maher Al-Akhras, a 49-year-old Palestinian administrative detainee in Israeli jails, is currently facing an imminent threat to his life at Kaplan hospital following the increased deterioration and severity of his health condition after 73 days of hunger strike. Mr. Maher announced an ongoing open hunger strike the day of his arrest, on 27 July 2020, in a quest to seek justice against the unfair four-month administrative detention order. Since then, he has been solely consuming water, refusing supplements such as vitamins or salt, and any other liquids.

On 23 September 2020, Adv. Ahlam Hadad, Mr. Maher’s legal attorney, submitted a petition to revoke the administrative detention order, and in response, the Israeli High Court decided to “freeze” the order against Mr. Maher. The court explained that, at the moment, bearing in mind Mr. Maher’s critical health status, there exists no “security threat” or the possibility of a future threat. The decision to “freeze” the administrative detention order does not in any way cancel the order or eliminate the risk of renewing it or even proceeding with the remaining duration afterward. It does indicate that Mr. Maher is not currently detained, and he is allowed visitation rights. However, it is an attempt to break Mr. Maher’s ongoing open hunger strike and an intimidating tactic that aims to continue oppressing the detainee denying him any right to legitimately defend himself and seek justice.

Later, on 1 October 2020, a second petition was submitted against the administrative detention order, however, the court rejected the petition on the basis that the order is inactive at the moment, hence it cannot be revoked. It is evident that the intention of the Israeli military prosecutor, along with the Israeli Intelligence Forces (“Shabak”), is to keep Mr. Maher under administrative detention. Notwithstanding, the lack of clear evidence or conducting any serious investigations on the credibility of the allegations against him. In light of the court’s persistence not to revoke Mr. Maher’s unjust administrative detention order and the Israeli occupation authorities’ intentions, Mr. Maher is still proceeding with his open hunger strike.

The systematic and arbitrary use and practice of administrative detention by the Israeli occupation authorities have attracted widespread condemnation from local and international organizations as a violation of fundamental human rights. Notably, the United Nations Committee against Torture (“UNCAT”) on 13 May 2016 called on the Israeli government to “take the measures necessary to end the practice of administrative detention and ensure that all persons who are currently held in administrative detention are afforded all basic legal safeguards.” Consequently, the Palestinian Human Rights Organizations Council affirms such observations, and further calls on:

ii.            The international community and all High Contracting Parties to the Fourth Geneve Convention tofulfill their obligations towards protecting human rights and enforcing the implementation of international humanitarian law, especially when grave breaches are being perpetrated in times of conflict and occupation;

iii.           The immediate intervention of the relevant United Nations (“UN”) Special Procedure mandates including the UN Special Rapporteur on the situation of human rights in the Palestinian territory occupied since 1967, Mr. S. Michael Lynk; and the Working Group on Arbitrary Detention.