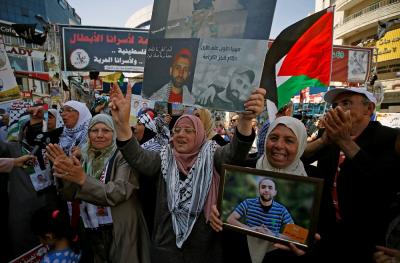 After 40 days, Palestinian prisoners have suspended their mass hunger strike, which was launched on 17 April 2017 by an estimated 1500 Palestinian political prisoners in Israeli prisons and detention centers. The prisoners had a range of demands, highlighting basic needs and human rights, including an end to the denial of family visits, the right to proper health care and medical treatment, the right to pursue distance higher education, an end to solitary confinement, and an end to administrative detention, imprisonment without charge or trial.

Issa Qaraqe, director of the Palestinian Prisoners Affairs Commission spoke at a press conference on Sunday, 28 May in which he declared that “80 percent of the demands” of the prisoners were achieved in the strike.

Qaraqe reported on the major items agreed upon by the strikers with the Israeli prison administration, as noted by Palestinian attorney Karim Ajwa, who met on Sunday morning with one of the strike leaders, Palestinian prisoner Nasser Abu Hmeid:

1. Expanding access to public telephones in order to communicate with family members, in accordance with agreed-upon mechanisms, with continuation of dialogue on this issue as a priority for prisoners in all prisons.

2. Agreement was reached on a range of issues relating to family visits; first, lifting the security ban on hundreds of family members of Palestinian prisoners, ending the practice of returning visitors holding permits and refusing their visits at checkpoints, and lifting an unjustified ban imposed on more than 140 children who had been banned by the prison administration from visiting their parents.

3. Giving an initial commitment to shorten the time between visits for Palestinian prisoners from Gaza, for a period of up to one month instead of two months or more between visits.

4. Agreement was also reached on a number of issues related to the conditions of family visitation, including allowing the introduction of clothing and bags, and allowing prisoners to provide and share sweets with children and others.

5. Introducing new standards for visitation for relatives of the “second degree,” such as allowing the introduction of nephews and nieces during nursery school age and providing that prisoners whose fathers and mothers have died may add one or two additional more distant family members to their visitation list.

6. Providing formal approval for the return of the second monthly family visit according to the mechanism agreed upon between the International Committee of the Red Cross and the Palestinian Authority.

7. Reaching an agreement on the Ramle prison clinic, to return the ill prisoners to the larger “old” section of the prison, which has been renovated.

8. Agreement was reached on issues related to the conditions of women prisoners, including the inclusion of all prisoners in HaSharon prison, adjustments to the visit process with family members, husbands and children, the introduction of handicraft materials, improvement of conditions of confinement, and establishment of a special transportation system, rather than the “bosta,” for transfer to and from the courts.

9. On the issue of child prisoners, a number of issues were agreed upon to improve their conditions of confinement, access to education and related issues.

10. Agreement was reached on most issues related to the difficult conditions of life in Nafha prison.

11. On the issue of the sick prisoner patients held in the Ramle prison clinic, as noted above, to return the prisoners to the re-opened section with improved humanitarian conditions, as well as introducing a new system for the movement of these prisoners with private transportation, directly to and from the courts, rather than transiting through lengthy crossing points on the “Bosta.”

12. Distributing meals to prisoners in transit in the “Bosta” during transfers and allowing them access to use the toilet during this time.

13. Approving the establishment in every prison department of Palestinian “security prisoners” of a kitchen area for the preparation of food and the introduction of cooking equipment, rather than being in the same rooms with the prisoners.

14. Allowing photographs with parents once annually, or with a prisoner’s spouse. In the event of the prisoner’s father or mother’s death, the photograph could be taken with a brother or sister.

16. Introducing modern sports and recreation equipment in the recreation yards.

18. Adding an ambulance to be equipped for use to transfer prisoners in urgent health emergencies, to be stationed at the Negev, Ramon and Nafha prisons, due to the fact that these prisons are far from hospitals.

19. Transferring prisoners to prisons closer to their families’ places of residence.

In addition to these points, there will be a mechanism for further negotiations on additional issues. More details to come as the prisoners' movement and committee of the hunger strike release their statement regarding the nature of the agreement made with the Israeli Prison Service (IPS).

In closing, Addameer Prisoner Support & Human Rights Association would like to salute the prisoners' movement for it victory and for always standing in the front lines of the Palestinian struggle for liberation. Addameer further expresses its sincere gratitude to all human rights organizations, grassroots movements, state officials, local and international solidarity activists who have expressed solidarity with hunger-striking prisoners and detainees.

20-09-2021
199 human rights network and organizations hold the occupation state fully responsible for the lives and safety of the prisoners who liberated themselves from Gilbo'aprison and were re-arrested, and demand the formation of an independent international inv
09-09-2021
Palestinian Human Rights and Civil Society Warn the International Community of Collective Punishment and Retaliatory Measures by the Israeli Occupation Authorities
02-09-2021
PHROC Submits Urgent Appeal to the UN Special Procedures on the Critical Need to Immediately Release Nine-Month Pregnant Palestinian Woman Anhar Al-Deek from Israeli Prison