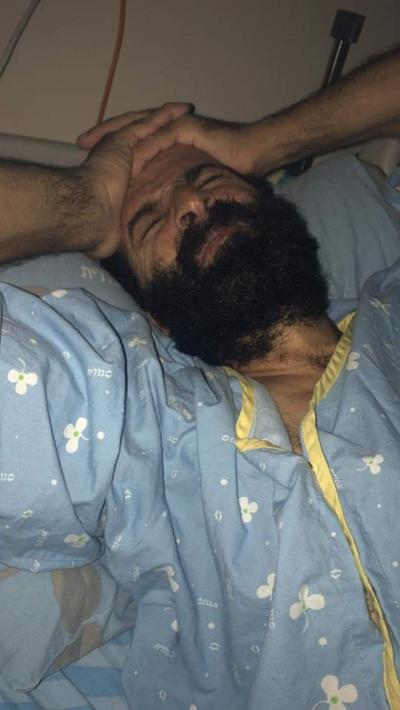 Entering his 99thday of an open hunger strike, Maher Al-Akhras, a 49-year-old Palestinian and a father of six, is facing a serious and imminent threat to his life at Kaplan Medical Center. Due to a deficiency of salts and fluids in his body, and his refusal to take nutritional supplements, Maher has been experiencing frequent seizures, acute headaches, significant weakness in his vision and hearing, in addition to severe pain all over his body, especially his chest area. On the day of his latest arrest, 27 July 2020, Maher announced that he will undergo an open hunger strike, in a quest to seek justice; not only against his four-month administrative detention order, but also against Israel’s longstanding and unlawful policy of administrative detention, which currently affects around 350 Palestinians.

On 27 July 2020, Maher was arrested by the Israeli occupying forces and taken to Huwwara checkpoint and detention centre, when he immediately announced his open hunger strike. Maher was then transferred to Ofer prison, where he stayed for around three weeks, before he was taken to al-Ramla prison medical clinic. On 23 September 2020, as Maher began to occasionally lose his consciousness and suffer from health implications, he was transferred to Kaplan Medical Center, where he currently remains.

On 23 October 2020, the United Nations Special Rapporteur on the situation of human rights in the Palestinian territory occupied since 1967, Professor Michael Lynk, issueda statement urging Israel, the Occupying Power, to immediately release Maher, stressing the urgency of doing so, especially considering Maher’s dire health condition, and Israel’s failure to provide information that justifies its allegations. Underlining the illegality of Israel’s conduct and use of administrative detention, Professor Lynk further called upon Israel to “abolish its practice of administrative detention.” Similarly, the European Union expressedits concerns on Israel’s extensive use of administrative detention, and called on Israel to “fully respect international humanitarian law as well as its human rights obligations towards all prisoners… and to do all it can to preserve the health of Mr. Al-Akhras in the continued handling of this case.”

Article 9 of the International Covenant on Civil and Political Rights (ICCPR), to which Israel is a State Party, guarantees to everyone the right not to be subjected to arbitrary detention, and if arrested, to be promptly informed of the reasons for the arrest and of any criminal charges. While Israel has derogated from its obligations under this article, the UN Human Rights Committee (HRC) has made it clear in its periodic reviews of Israel’s compliance with the ICCPR, that it is concerned that Israel’s practice of administrative detention violates essential rights protected in the Covenant. Further, the HRC has held that the requirement of effective judicial review of detention cannot be derogated from.

In addition, the right to a fair trial is guaranteed under international humanitarian law. The legal principle that no one may be convicted or sentenced, except pursuant to a fair trial affording all essential judicial guarantees, has been deemed customary by the International Committee of the Red Cross. Moreover, both international humanitarian and human rights laws firmly establish that detained persons are to be treated humanely and with respect. Administrativedetention can only be used exceptionally in emergencies. Under Article 78 of the Fourth Geneva Convention, protected persons may only be detained for “imperative reasons of security,”yet Israel’s routine use of administrative detention is in clear violation to international law standards. Israel systematically and arbitrarily utilises administrative detention, while proceeding on the basis of “secret evidence,” which cannot be accessed by the detainee nor their lawyer; undermining their right to a fair trial.It also should be noted that Maher is currently being held in Israel, in what constitutes a violation of Articles 49 and 76 of the fourth Geneva Convention, which prohibit the transfer of prisoners outside the occupied territory.

The Palestinian Human Rights Organizations Council (PHROC) asserts that Maher should not have to resort to using his empty stomach to demand his rights, as these rights should have been protected by international law. As the international community systematically fails to put an end to Israeli impunity, Maher, and all Palestinians, will remain under the threat of Israel’s unlawful practices and policies, including its administrative detention policy.

Accordingly, PHROC urgently calls upon the immediate intervention to end the administrative detention of Maher Al-Akhras and ensure his rights to health, life, and fair trial. To this end, we urge:

1.     Israel, as the Occupying Power, to immediately release Maher Al-Akhras, who is currently under imminent threat to his life, halt all procedures and intentions to keep Maher in administrative detention, and to put an end to the systematic and arbitrary use of administrative detention against the protected Palestinian population;

2.     The international community and all High Contracting Parties to the Fourth Geneva Convention to fulfil their obligations towards protecting human rights and enforcing the implementation of international humanitarian law, especially when grave breaches are being perpetrated in times of conflict and occupation;

3.     The immediate intervention of the relevant United Nations Special Procedure mandates including the UN Special Rapporteur on the situation of human rights in the Palestinian territory occupied since 1967, Professor Michael Lynk; Special Rapporteur on Torture and Other Cruel, Inhuman or Degrading Treatment or Punishment, Professor Nils Melzer, and the Working Group on Arbitrary Detention; and