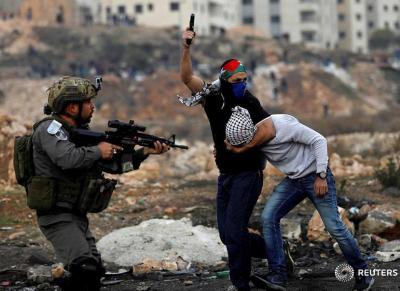 The Israeli forces carry on with the intensified suppression campaign, in the early hours of Thursday 14 December Israeli forces have raided several cities in the West Bank, two universities and 4 printers.

The occupation forces arrested around 28 Palestinians including 3 females since only between yesterday evening and today’s morning:

Thursday morning: several Palestinian cities faced incursions from Israeli forces this morning. And so, 4 Palestinians were arrested from Ramallah, one from Bethlehem and another from Jericho during those different incursions.

Palestinians, as an occupied people, are protected persons under Article 4 of the Fourth Geneva Convention. However, Israeli forces systematically suppress and arbitrarily detains Palestinians. Israeli forces in the past two weeks have increased the use of extra force against Palestinian protected civilians. Furthermore, these mass arrest and harassment campaigns are part of Israeli’s collective punishment measures that are in direct violation of Article 33 of the Fourth Geneva Convention and Article 50 of the Hague Regulations which specifically prohibits collective punishment.

As such, Addameer calls on the immediate release of all prisoners. In addition, we call on third state parties to pressure the Israeli occupation authorities to respect their obligations under international humanitarian law and international human rights law, and to hold them accountable for the violations they have committed.