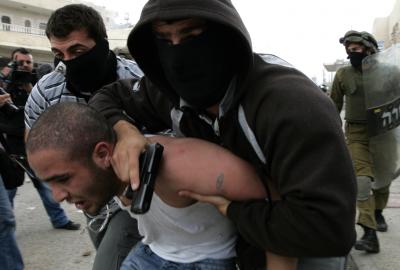 Occupation authorities arrested 509 Palestinians during the month of March 2017 from the West Bank, Gaza Strip and Jerusalem, including 75 children and 13 women, including two minor girls and 5 Palestinian Legislative Council deputies.

The total number of Palestinian prisoners in Israeli jails is approximately 6,500; among them are 62 women prisoners, including 14 minor girls. There are approximately 300 children detained in Israeli prisons, and 500 Palestinians imprisoned without charge or trial under administrative detention.

Last month also saw the continued arrest of Palestinian leaders and the prosecution of political activists and journalists by the occupation, in an attempt to prevent them from performing their role in educating the community and organizing the Palestinian people, and to prevent journalists from covering and exposing the practices of the occupation. This policy is intended to suppress and gag their voices, particularly in occupied Jerusalem, During March, five deputies of the PLC were arrested including MP Samira Halaiqeh, while five journalists working in various media were seized.

In addition, Palestinian prisoners experienced a continued policy of invasions of sections and rooms of detainees and ransacking their belongings, as well as continued medical neglect of hundreds of jailed patients and high rates of administrative detention, solitary confinement and isolation, the detention of children and the imposition of exorbitant monetary fines, and denial of family visits to hundreds of Palestinian prisoners.

The four institutions expressed their strong condemnation of the gross and systematic Israeli violations of international law against Palestinian prisoners, and also condemned the continuing arrest and systematic targeting of journalists by the occupation, which hinders their work in disseminating information about human rights violations to which Palestinians are continuously exposed. Such repression violates freedom of the press and freedom of expression and also violates international conventions and humanitarian law, which provide special protection for journalists through the additional Protocol I of the Fourth Geneva Convention of 1977, and Article 19 of the Universal Declaration of Human Rights of 1948, and Article 19 of the Covenant on Civil and Political Rights of 1966, which uphold the right to receive and impart news and ideas, which applies to journalists. The institutions also note the continuing arrests by the Israeli occupation of members of the Palestinian Legislative Council by the Israeli occupation despite international law barring the arrest of individuals for their political views.

**The translation was provided by Samidoun Palestinian Prisoner Solidarity Network.

10-05-2021
Action Alert: International Community Must Take Immediate and Concrete Measures to Halt Israel’s Aggression against Palestinian Jerusalemites
24-04-2021
Sheikh Jarrah Families Send Letter to the International Criminal Court Calling for Urgent Investigation of their Imminent Forced Displacement, Endorsed by 190 Organisations
15-04-2021
16 Palestinian and Regional Organisations Send Joint Submission to the UN Secretary-General on Intimidation and Reprisals for Cooperation with the UN