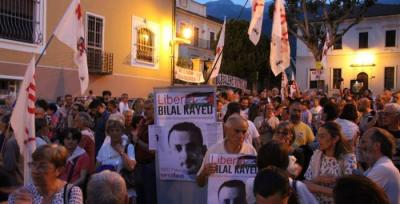 Israel authorities have transferred hunger striking administrative detainee Bilal Kayed yesterday (3 July 2016) to solitary confinement in Ashkelon Prison. Mr. Kayed was transferred from solitary confinement in Rimon prison to Ohli Kedar prison on 28 June 2016, as he entered his 14th day of hunger strike. During his time in Ohli Kedar, he was subjected to violent raids of his cell, as well as body searching on a regular basis. When he was transferred from Ramon prison to Ohli Kedar, he was strip-searched. He reached Ashkelon at 6.00 PM last night and is currently held in an isolation section with very poor conditions. The cell is sized 2 X 1.5 meters, with no windows, and there is a toilet and a broken sink.

Mr. Bilal Kayed was offered a deal of deportation to Jordan for 4 years under condition of no political involvement. However, Mr. Kayed refused the deal, which was offered to him by the military commander with recommendations from the intelligence. He was threatened to be kept under administrative detention for an additional four years for refusing the deal.

Mr. Kayed reported to Addameer's attorney Farah Bayadsi that he has refused to undergo any medical examinations, vitamins and salt supplements. He is currently only consuming water. He feels tiredness, dizziness, weakness, and inability to fall asleep. His weight has fallen significantly since his hunger strike.

Bilal Kayed, a 35-year-old Palestinian from Nablus was arrested in 2002 and sentenced to 14 and a half years. He was previously placed in isolation in Rimon prison since September 2015 until his scheduled release on 13 June 2016 after completing his sentence. However, a 6-month administrative detention order was issued against him on the same day, immediately after which he was placed back in isolation. Mr. Kayed has been on hunger strike since 15 June 2016 in protest of his detention without charge or trial.

The confirmation hearing of Mr. Kayed's administrative detention has been scheduled for tomorrow 5 July 2016.

Addameer condemns the administrative detention of Bilal Kayed, and considers it to be a form of arbitrary detention that may amount to psychological torture. Addameer also demands the immediate release of Mr. Kayed, who has already served his sentence and whose detention is evidently an arbitrary one. Addameer is further concerned about the health situation of Mr. Kayed, and recognizes hunger strike as a legitimate form of peaceful protest against arbitrary detention.