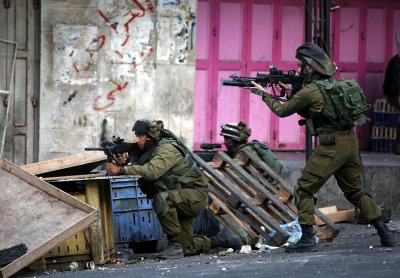 Ramallah- 25/10/10/2015- Addameer Prisoner Support and Human Rights Association holds Israeli occupation authorities responsible for the recent escalation in the West Bank and 1948 territory. The practices and violations by Israeli occupation and Israeli settler in addition to the provocation at Al-Aqsa mosque are the main reasons for the recent deterioration and escalation. Israeli practices of collective punishment and daily violations including house demolitions, arrests, extrajudicial executions and assaults on Palestinians in addition to confiscating Palestinian land for settlement and overlooking settler violence –the most recent of which was the arson of the Dawabsheh family in Duma south of Nablus have all factored to fuel the current escalation.

Since the beginning of the Palestinian popular uprising that started this October, the occupation authorities carried out mass arrests in the West Bank and 1948 territory. Addameer’s statistics show that since the beginning of October and until the afternoon of 25 October 2015, 942 Palestinians including 144 children were arrested as follows; 790 were arrested from the West Bank including 247 from occupied Jerusalem and 152 were arrested from 1948 territory. The total number of Palestinians in Israeli detention thus rises to approximately 6300 Palestinians including 270 children and 36 female prisoners. Israeli occupation authorities have also issued 60 administrative detention orders since the beginning of the month, 43 of which were new orders and the remaining 17 which were renewals. These statistics are alarmingly increasing on a daily basis.

The recent wave of mass arrests has resulted in a severe overcrowding in Israeli occupation prisons and detention and interrogation centers and in exacerbating their already poor conditions. Addameer’s lawyers documented during recent visits the suffering of prisoners and detainees who testified they were not receiving enough food, hygiene products, clothes, mattresses or pillows in addition to the overcrowing in cells and other inhuman and degrading detention conditions.

Israeli occupation authorities have further escalated their oppressive measures against Palestinians and have resorted to holding the bodies of 22 Palestinian who were suspected of allegedly attempting stabbing attacks, despite little evidence to support such suspicions. The families of these individuals were also targeted and harassed as several of them were arrested and some received punitive house demolition orders, all being policies and acts of collective punishment and reprisal.

Israeli practices aim at creating facts on the ground by imposing and validating the status quo of settlements, displacing Palestinians from occupied Jerusalem and Area “C” of the West Bank in addition to isolating Jerusalem from the West Bank and harassing Palestinian civilians. Israel’s practices will only result in further deteriorating the current situation and escalating it.

IOF have gravely escalated their human violations in response to the recent uprising in the occupied territory. IOF have arrested dozens of wounded Palestinians and took them for interrogation regardless of their medical condition. Furthermore, IOF have kidnapped and arrested wounded Palestinians from ambulances (4 cases have been documented) and from hospitals. The IOF has broken into the Specialized Arab Hospital in Nablus and kidnapped one of the patients there, Karam Al-Masri (23 years old) and have also broken into several hospitals in Jerusalem, searched ambulances and obstructed their work.

Addameer further monitored several punitive arrests and harassment of family members of Palestinian youth suspected of allegedly attempting stabbing attacks. So far seven family members of suspects were arrested including two who were placed under 6 months administrative detention; the father of Thaer Abu Ghazaleh and the brother of Shuruq Dwaiat both suspected of stabbing attacks.

Addameer also documented an escalation with arrests of Palestinians accused of allegedly inciting violence and racism through social media outlets including Facebook. So far, Addameer has documented the arrest of 30 Palestinians charged with incitement 25 of whom were placed under administrative detention without charge or trial. Such arrests are a major blow to freedom of expression and a violation of international human rights norms. It is noteworthy that Israeli occupation authorities have not arrested an Israelis under such allegations.

The majority of those arrested face all forms of physical and psychological abuse and illtreament by Israeli occupation forces and the undercover Mustaribin forces. Addameer has documented an upsurge in brutal assaults during arrest and interrogation since the beginning of the recent events earlier this month. Among the cases that Addameer has documented was that of 18-year-old Mohammad Burqan who was shot with a rubber bullet in his left eye by Israeli occupation forces in Al-Turi Neighborhood in occupied Jerusalem. The injury resulted in the loss of eyesight in Burqan’s left eye. Following his injury, Israeli special forces physically assaulted him and repeatedly punched him on his head and kicked him on his stomach. Burqan was later transferred to Hadasa Ein Karem hospital where his left eye had to be surgically removed.

Israeli occupation forces transferred Burqan to interrogation 4 days after the surgery, despite the fact that he had already been subjected to an interrogation in the hospital. During his 4 days at the hospital Burqan was chained to the hospital bed at all times. A charge sheet was presented against Burqan despite his critical medical condition. Burqan informed Adv. Farah Bayadsi from Addameer during a visit in Mascobiyya detention center that he suffers from severe headaches and dizziness. He was not able to eat for days as he could not open his mouth due to the pain in his jaw and he has been bleeding from his nose at night which has prevented him from sleeping. Adv. Bayadsi confirmed that Burqan was not receiving medication or medical treatment since he was transferred to Mascobiyya detention center despite his critical medical condition.

Addameer further documented the arrest of Ahmad Hamed, a 21 years old student at Birzeit University who was brutally assaulted by the undercover Mustaribin unit and shot at point-blank range in his thigh before being arrested and transferred to the settlement Beit El near Ramallah. Hamed was left to bleed for over an hour while his hands were tied with plastic handcuffs. Hamed informed Adv. Samer Sama’an from Addameer during a visit that he was taken into interrogation a day after his arrest despite his medical condition. He could not walk and had to be taken with a wheelchair. He suffers from severe pain in his legs and all over his body. Hamed was charged with allegedly throwing stones and assaulting the undercover Mustareb policeman.

Addameer confirms that the Israeli occupation practices and ill-treatment against Palestinians violate International Humanitarian Law which strictly bans acts of collective punishment and reprisals against protected persons living under occupation as provided for under Article 33 of the Fourth Geneva Convention applicable in the occupied Palestinian territory.

Excessive Use of Force and Extrajudicial Executions

Since the beginning of the current events, IOF has resorted to excessive use of lethal force against Palestinian civilians and those allegedly accused of attempting stabbing attacks. Footage and several eyewitnesses have confirmed that the Israeli occupation’s forces have use lethal force against unarmed Palestinians upon suspicion without them posing any direct threat or harm which would justify opening fire. Furthermore, IOF have also used live ammunition and rubber bullets aimed at the upper body of protesters during demonstrations and clashes. This dangerous escalation has resulted in the death and injury of many Palestinian youth.

The excessive use of force against suspects has resulted in the death of 28 Palestinian youth and the injury of several others. These numbers suggest the deliberate use of lethal force against Palestinians in violation of international law and human rights norms which limit the use of lethal force to cases where a suspect poses serious threat. Even in the cases where Israeli occupation claimed the suspect held a knife, international law norms prohibit the use of lethal force and instead allows the use of force to wound following warnings and apprehend a suspect, not to shoot to kill. This recent trend constitutes a grave breach of the Fourth Geneva Convention as provided for under Article 147 and a war crime as provided for under Article 8 of the Rome Statute.

Among the most notable cases of extrajudicial executions committed by IOF in the past month was the killing of 19-year-old Fadi Alloun, who Israeli police claimed held a knife and attempted stabbing an Israeli settler in Jerusalem. The circumstances of the alleged stabbing are still not clear; however footage has emerged which shows that Alloun was unarmed when he was shot and was actually trying to take cover from a group of Israeli settlers who tried to lynch him, and who subsequently asked the police to shoot Alloun claiming he tried to stab someone. The footage clearly shows Alloun did not pose a threat to anybody or to the officer who shot him, and therefore his extrajudicial killing was not legally justified. Following Alloun’s unlawful killing, Israeli occupation authorities held his body for close to one week in violation of ethical and democratic values as well as domestic and international law and human rights norms. Israeli insistence on holding the body of Fadi Alloun despite the family’s pleas to recover the body and bury him even under the Israeli occupation’s terms, clearly indicate that holding the body is simply an act of collective punishment.

Addameer demands the following:
• That the United Nations and UN Security Council to fulfill their obligation to stop the crimes and violations by the Israeli occupation and provide protection for the Palestinian population.
• That the High Contracting Parties to the Fourth Geneva Convention fulfill their obligation of protecting Palestinian protected persons, civilian objects and places of worship in times of war.
• That the Prosecutor of the International Criminal Court to immediately initiate an investigation into these crimes committed by the Israeli occupation against Palestinian people.

02-02-2023
In a Joint Submission to the UN Commission of Inquiry, Palestinian Organizations Highlight Israeli Policies to Entrench and Maintain its Settler-Colonial and Apartheid Regime
24-01-2023
Commemorating the International Day of Education by Highlighting the Reality of the Right to Education for Palestinian Political Prisoners
14-12-2022
Urgent Appeal to Commercial Airlines: Avoid Assisting in the Forcible Deportation & Transfer of Human Rights Defender Salah Hamouri