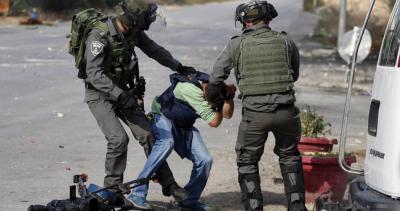 Addameer Prisoner Support and Human Rights Association condemns the arrest and detention of more than seven Palestinian journalists since the beginning of this year as well as the recent storming and closure of Palestine Today office in Ramallah. The occupation, therefore, continues to target and arrest human rights defenders, particularly journalists, in order to repress and silence Palestinians from presenting the brutal reality of the Israeli occupation.

On Friday, 11/03/2016, the Israeli occupation forces raided and closed down the office of Palestine Today channel  and the company “Trans-Media", which provides technical services for the channel. The occupation forces  confiscated their equipment, destroyed their contents, and arrested the director of the channel, Farouk Elayan, journalist and photographer Mohammed Amr, and technicians broadcaster Shabib Shabib. Mohammed Amr and Shabib Shabib were later released after interrogation. Additionally, correspondent Ibrahim Jaradat was arrested on 03/13/2016 at a flying military checkpoint near Bir Nabala.

The occupying power has also forced the French satellite "YOTEL Sat" to stop satellite broadcast for Al-Aqsa channel because of their purported role in propagating incitement. A number of Palestinian journalists have received threats from anonymous people, who claimed to be "Israeli security forces" and they were told that they are under surveillance.

According to Addameer’s statistics, the Israeli forces arrested seven Palestinian journalists since the beginning of this year. Five of them remain in custody: Samer Abu Aisha, Mujahid al-Saadi, Sami Al-Saai, Farouk Elayan and Ibrahim Jaradat.  Currently, 22 Palestinian journalists remain in Israeli prisons in total. The longest serving journalist with a life sentence, Mahmoud Issa, was working as a reporter for Sawt Al-Haq Wal Hurriya before his arrest in 1993.

Israel has adopted a policy of arrest, detention, intimidation, threats and, at times, collective punishment against human rights defenders in order to repress and discredit them and their efforts for reflecting the crimes committed by the occupation against Palestinians. The UN Declaration on Human Rights Defenders defines human rights defenders as individuals who play an important role in furthering the cause of human rights through activities such as the documentation of violations, providing support and assistance to victims seeking remedies, combating cultures of impunity and mainstreaming human rights culture and information on an international and domestic level. Human Rights Defenders in the occupied Palestinian territory face various types of harassment and rights violations by the occupation forces, irrespective of the protection afforded to them in international conventions, and particularly the Declaration on the Right and Responsibility of Individuals, Groups and Organs of Society to Promote and Protect Universally Recognized Human Rights and Fundamental Freedoms.

Addameer holds that these punitive measures  taken by the occupation forces against Palestinian journalists and human rights defenders  are in contravention with international humanitarian law, which aim to deter Palestinian human rights defenders, intimidate them, and push them to give up their rights to free speech and expression. The arrest of journalists is a crime that gravely contravenes the Universal Declaration of Human Rights and the Universal Declaration on the Protection of Human Rights Defenders. As such, Addameer demands condemnation by the international community against the campaign of mass arrest against Palestinian journalists, and for the protection of human rights defenders.