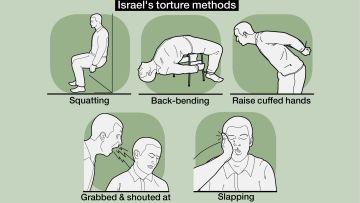 An article by Haaretz accounts the methods that interrogators describe and brings light to torture practices that are known to be routinely and systematically used against Palestinian detainees.

The article recounts that “N., a former senior interrogator … said the methods used are carefully chosen to be effective enough to break the suspect’s spirit, but without causing permanent damage or leaving any marks.”

Israeli physical torture methods cited in the article include slapping, back-bending, shouting, and being forced to squat. The article also describes the excruciatingly painful back-bending position in which the detainee “is seated on a backless stool, his arms and legs cuffed, and the interrogator forces him to lean back at a certain angle. This requires the suspect to use his stomach muscles to keep from falling.” Another method described includes “forcing the handcuffed suspect to kneel with his back to the wall for long periods of time. If the suspect falls, the interrogators put him back in position, and they keep him there even if the suspect cries, begs or screams.”

It is important to note that the use of physical pressure against prisoners and detainees is less common since the 1999 High Court ruling in The Public Committee Against Torture in Israel v. Government of Israel, which placed certain restrictions on the use of torture during interrogation. However, under the court’s decision, “moderate physical pressure” was allowed to continue in the “necessity of defence” and in “ticking time-bomb” cases. Despite the landmark court ruling, Israeli interrogators today continue to use forbidden interrogation techniques as explained above. As Israeli forces can legally hold detainees incommunicado for up to three months, Israeli Security Agency (ISA) interrogators are able to use methods of torture with impunity.

Lack of Investigations of ISA officers

Complaints of torture seldom result in investigations. In addressing torture, the Public Committee Against Torture in Israel (PCATI) has reported that between the years 2001 and 2010, 701 complaints regarding torture and ill-treatment had been reached at the Inspector of Interrogee Complaints [who at the time was responsible for these complaints], and that not a single one had resulted in a criminal investigation.  PCATI also added that:

“As part of its ongoing efforts to pursue all legal remedies following complaints of torture handled by the organisation, in 2010 and 2011 PCATI’s legal department filed five petitions to the High Court of Justice on behalf of 26 victims of torture. Each of the petitioners in question were subjected to particularly grueling physical and psychological torture and/or ill-treatment in the course of ISA interrogations - in all cases the closure of the victims’ complaints have been unquestionably approved by the legal authorities following the IIC’s preliminary inquiry. It is worth noting that the majority of detainees who have reported torture or ill-treatment to PCATI lawyers ultimately refuse to submit complaints to the authorities, citing lack of trust in official mechanisms of investigation or fear of reprisals.”

Addameer has documented 75 Palestinians who were killed as a result of torture during Israeli interrogation since 1967. Such cases have persisted despite the Israeli state’s ratification of The United Nations Convention against Torture on 03 October 1991. Article 147 of the Fourth Geneva Convention categorizes willful killing, torture or inhuman treatment, and “wilfully causing great suffering or serious injury to body or health” as grave breaches, and Article 8 of the Rome Statute of the International Criminal Court categorizes “torture or inhuman treatment” as war crimes.

Addameer calls for immediate investigations of the routine practices of torture and ill treatment against prisoners and detainees. These practices, which are systematically practiced against Palestinians should be immediately and impartially investigated by the International Criminal Court (ICC).