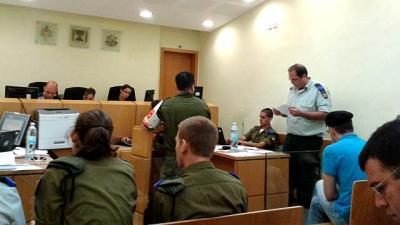 On June 7th, 1967,  three proclamations and a series of military orders were issued as proclamations throughout the West Bank and Gaza Strip. Proclamation Number 1, announced the administrative takeover of the Israeli military and the powers of preserving public security and order. Proclamation Number 2,  assured the continuity of a judiciary system, and declared the powers of the military commander of Israeli occupation forces. Finally, Proclamation Number 3, put forth legal procedures of Military Courts, and Order Number 3 established the military courts (initially Jerusalem, Hebron, Jenin, Nablus, Ramallah, and Jericho). The Order Concerning Security Provisions was replaced in 1970 to a new order 378, “Order Concerning Security Provisions” which has become the basis of the Military Courts which routinely administer the detention, interrogation, prosecution, trial, and sentencing of Palestinians.[1]

Additional courts were opened during the first intifada (1987-1993) in Hebron and Jenin. Following, the Oslo Accords, these courts were closed.[2]   Currently, there are two military courts which operate in the West Bank, Ofer Court and Salem Court, located in closed military zones, that prosecute Palestinians from the West Bank who are arrested by the Israeli military and charged with security violations (as defined by Israel) and other crimes. Not all Palestinians who are arrested are prosecuted in the military courts; some are released while others are administratively detained without trial (see administrative detention below). The conviction rate is 99% percent of those who are charged, and of these convictions, the vast majority are the result of plea bargains.[3]

Categorical and Geographical Scope of the Military System

A wide-ranging set of military regulations governs every aspect of Palestinian civilian life, including when Palestinians living in the oPt are arrested and detained.  These military orders provide for a wide range of offenses divided into five categories: “Hostile Terrorist Activity”; disturbance of public order; “classic” criminal offenses; illegal presence in Israel; and traffic offenses committed in the oPt. These sweeping offenses criminalize many aspects of Palestinian civic life. As one example, even though Israel has been engaged in peace negotiations with the Palestinian Liberation Organization (PLO) since 1993, the political parties that compose the PLO are still considered “illegal organizations.” Carrying a Palestinian flag is also a crime under Israeli military regulations. Participation in a demonstration is deemed a disruption of public order. Even pouring coffee for a member of a declared illegal association can be seen as support for a terrorist organization.

It may be argued that the categorical and territorial scope the military court transcends its requirements under international law. The Geneva Convention Relative to the Protection of Civilian Persons in Time of War (Fourth Geneva Convention), 12 August 1949, also addresses the use of military courts in Article 66, which states:

Under military order 1651 (2009), throwing stones is considered a “security offence”, and its punishment is up to 20 years imprisonment. Additionally, the criminalization of civic activities by Military Order 101, results in the continued targeting of Palestinian students, activists, human rights defenders and civil society leaders. This targeting must be viewed in a broader context of systematic attempts by the Israeli occupation to suppress Palestinian civil society, which attempts to hold Israel accountable for the crimes committed against Palestinians. Evidence of this repression can be seen in the rate of arrest, which is perhaps another testimony.

While international law stipulates that civilians may be prosecuted in military courts under a temporary basis, possibly reflecting the general conceptualization of occupation as a temporary situation, these courts have been used to prosecute Palestinians in the occupied territories for decades. Since 1967, approximately 800,000 Palestinians have been tried in these courts.[6]

The geographical scope may also be contested in this regard. In contravention with the terms of territorial jurisdiction of the occupying power set forth by Article 42 of the 1907 Hague Regulations, which states that “the occupation extends only to the territory where such authority has been established and can be exercised,” the military court extends its jurisdiction to crimes in Rule of Criminal Responsibility Order (1968) even to alleged crimes not completely committed in the territory.[7]

Additionally, the categorical scope of the violations addressed in the military court system are also contestable. Articles 64 and 66 of the Fourth Geneva Convention state that such courts should be for the use of violations which constitute a threat to the security of the state and threaten the lives of soliders.[8] Despite this, Palestinians are regularly brought to Ofer and Salem military courts for violations including “trespassing”, “public disturbance”, and even traffic violations.  The military legal system’s wide-reaching geographical and legal jurisdiction altogether have been seen to make way for “extensive control by the military legal authorities” and for “judicial domination of the army over the Palestinian civilian population”.[9]

Military Order 101 which was issued in August 1967 at the onset of the occupation, criminalizes civic activities such as taking part in vigils, organizing and participating in protests, waving flags or other political symbols, even the printing and distributing of political material. In addition, “support to a hostile organization” any activity that demonstrates sympathy for an organization that military orders deems illegal is itself illegal. This is despite that fact that the majority of Palestinian political parties are in fact illegal. The order also states that any assembly or a gathering of ten people or more as defined by the provisions that may be interpreted as political requires a permit. The order also prohibits the printing of political material without a permit from the military commander. The effect of such provisions is the prevention of civic political life in the occupied territory. This arguably violates aforementioned articles 64 and 66 of the Geneva conventions, which stipulate that the use of such military courts must be solely for the sake of charges which involving threats to the security of the state.[10] Altogether, such military orders criminalize civic activities.

According to international humanitarian law, Israel has the right to establish military courts in the oPt as an Occupying Power, but relevant international human rights and humanitarian law restrict the jurisdiction of such courts to violations of criminal security legislation. However, the jurisdiction of Israeli military courts is far broader and includes offenses outside of the relevant legislation. This overgrown jurisdiction has meant the inclusion of vast sections of the domestic Israeli criminal code into the operations of the military court. This has included the utilization of precedents from domestic Israeli cases in the military court itself. Meaning that Palestinian lawyers must be fully versed in all relevant domestic Israeli cases in order to effectively represent clients, putting them at a distinct disadvantage.

The advocate or counsel conducting the defence on behalf of the prisoner of war shall have at his disposal a period of two weeks at least before the opening of the trial, as well as the necessary facilities to prepare the defence of the accused. He may, in particular, freely visit the accused and interview him in private. He may also confer with any witnesses for the defence, including prisoners of war. He shall have the benefit of these facilities until the term of appeal or petition has expired. [11]

The International Court of Justice (ICJ) has affirmed that certain International Human Rights Law (IHRL) instruments including the International Covenant on Civil and Political Rights (ICCPR) are applicable in the occupied territory[12]. Article 14 (3) of the ICCPR states that individuals who are charged are entitled minimum guarantees, including the right to be informed promptly of charges, to be provided adequate time and facilities for his or her defence, and to be held in trial without undue delay.[13] Trial standards are also addressed under International Humanitarian Law (IHL) as codified by the Fourth Geneva Convention also indicate that, “No sentence shall be pronounced by the competent courts of the Occupying Power except after a regular trial”[14]. The Fourth Geneva Convention also indicates in Article 71 that:

Accused persons who are prosecuted by the Occupying Power shall be promptly informed, in writing, in a language which they understand, of the particulars of the charges preferred against them, and shall be brought to trial as rapidly as possible.[15]

Arrested persons living in the occupied territories are rarely ever told the charges against them, if there are any,[16] upon arrest.

The absence of fair trial standards is also marked in the trials of Palestinian prisoners and detainees held in Israeli custody when preparing for an adequate defense. Article 71 of the Fourth Geneva Convention states that accused persons “shall have the right to be assisted by a qualified advocate or counsel of their own choice, who shall be able to visit them freely and shall enjoy the necessary facilities for preparing the defence.”[17] A salient violation to this article involves severe restrictions upon visitation by counsel. According to an approximation by a former military prosecutor, nearly 60% of GSS-interrogated suspects were denied attorney-client meetings as a result of orders issued by General Security Service (GSS). These orders are effective up to one month from the arrest.[18] This may also be renewed by a military court for an additional 30 days, according to Military Court Order 1651.

In addition, Ofer prison, which is located in the West Bank, does not have adequate meeting rooms for counsel. Palestinian lawyers generally cannot obtain permission to enter Israeli territory for the purpose of visitations to prisons. When visitations by counsel do take place, they are generally held from behind a glass and with a telephone conversations. Legal counsel of Addameer have indicated that the table is too small for holding up a notebook and that the facilities provided are inadequate for preparation of an adequate defense.

Further, while Article 71 of the Fourth Geneva Convention states that accused persons should have the aid of an interpreter during investigation and hearings (which are held in Hebrew),[19] translators in courtrooms (Arabic-speaking soldiers) are often unskilled in translation and unable therefore to provide appropriate interpretation, often leaving defendants unable to understand what is being said in the courtrooms.[20]

In conclusion, the Military Court is an institution working hand in hand with the occupation. It is staffed by the occupation army, administered by its commanders, and passing judgment on the occupied. The formation of such an institution is in keeping with the letter of international humanitarian law, but not with its spirit. More than being an organ of justice, it is an organ of control providing a layer of legitimacy to the continued domination of the Palestinian people.

[1] Yesh Din. (2007). Backyard proceedings: The Implementation of Due Process Rights in the Military Courts in the Occupied Territories.

[2] Yesh Din. “Backyard Proceedings: The Implementation of Due Process in the Military Courts in the Occupied Territories”. December 2007, pages 35-40.

[4] Yesh Din. “Backyard Proceedings: The Implementation of Due Process in the Military Courts in the Occupied Territories”. December 2007.

[7] Sharon Weill, “The judicial arm of the occupation: the Israeli military courts in the occupied territories”. International Review of the Red Cross. Volume 89, no. 866. June 2007, pages 404.

[12] International Court of Justice. 9 July 2004. “Legal Consequences of the Construction of a Wall in the Occupied Palestinian Territory”.

[18] Yesh Din. “Backyard Proceedings: The Implementation of Due Process in the Military Courts in the Occupied Territories”. December 2007, page 17.

[21] All figures were provided to Addameer by the Military Court itself.