Take action: use the form below to write to the UN

G4S is a private security company that provides services and equipment to Israeli occupation prisons at which Palestinian political prisoners, including children, are held without trial and tortured. 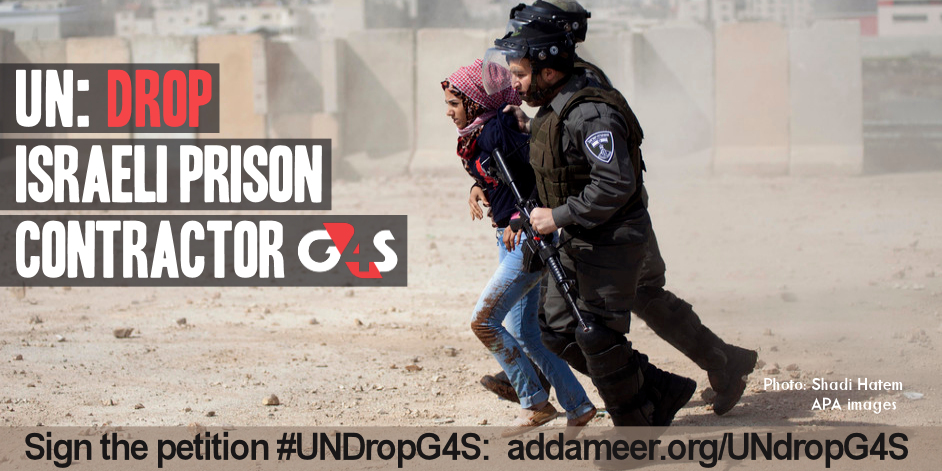 Since the start of October, Israeli occupation forces have arrested more than 1,800 Palestinians including 300 children as a way to repress Palestinian popular resistance. Many of these prisoners are being held in prisons G4S is helping Israel to run.

G4S has also been criticised for its role in violent abuse taking place in the prisons and detention centres it runs in South Africa, the US and the UK, and in numerous deaths in custody.

Despite G4S' role in human rights abuses in Palestine and across the world, the UN is contracting G4S to provide it with security services worth more than US$22 million each year. In doing so, the UN is contradicting its own stated contracting principles and turning a blind eye to the role that G4S plays in Israel's oppression of Palestinians and in human rights abuses all over the world.

G4S has already lost contracts with businesses and universities across the world; the Gates Foundation, Columbia University, United Church of Christ, and United Methodist Church have divested from the company. G4S now says it might consider ending its role in Israel’s prison system, which is all the more reason we need to keep the pressure up.

Join Palestinian prisoners rights group Addameer and organisations across the world in calling on the UN to drop its contracts with G4S.

Use the form below to send a message to UN general secretary Ban Ki Moon: